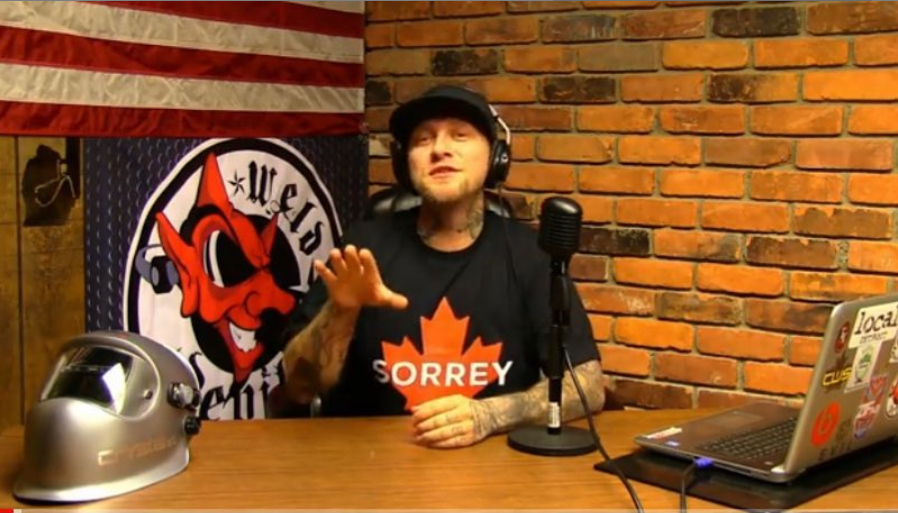 When he isn’t yucking it up with industry favorites and Instagram influencers on his Arc Junkies Podcast, Jimmy’s welding intricate designs for the aerospace enterprise and studying to become a certified welding inspector. His life hasn’t always been interesting conversations and cool projects, he’s had to work hard just like the rest of us to get to where he is today.

We sat down with Jimmy to learn more about the man behind the microphone. Here’s what he had to say…

Many eons ago, right outta high school, I was at a point where it was really bad in Detroit. People were being laid off left and right. Everything was feast or famine. My dad, who’s an engineer, worked for a company that had a welding job open so I got the job and learned basic intro stuff.

If the times weren’t so bad, I can almost guarantee I would’ve gone down a completely different path. Welding was just so bountiful even when things got bad.

When 9/11 happened, I wanted to do my part but the military said I had too many tattoos and couldn’t get in. Luck would have it that I became a contractor overseas for a welding job not long after. While I was taking my weld test, the military called me but I was already going over with another company. We were under the protection of the armed forces and had to wear battle armor to go to and from anywhere, even to the gym. It was awesome to work on something that big instead of working on racks for the F150.

I was transferred from Afghanistan to Kuwait for about 6-8 months. It wasn’t a war zone, just a country with pretty strict rules. We were working inside in air conditioning but it was 120 outside and it was absolutely insane. It was definitely a learning experience and showed me what the welding industry actually was. This was very extreme tolerances, people’s lives depended on it and it brought my weld game from zero to hero.

AN IDEA SO NICE, HE TRIED IT TWICE

After years in production, I decided to move into the aerospace industry which is where my idea for a podcast came from.

I’d been in the aerospace industry for four years and was working weird hours which made me lose touch with myself. All I could do was go to work and I felt myself start to become socially awkward. There was nothing else I could do to make the same money as I was making, so I couldn’t leave my job but I knew I needed to do something.

One night, I was sweeping the floor and watching a show called Comic Book Men, the first show to actually show podcasting in its real form. I had never seen podcasting before and was interested so I started to research. It seemed really easy and cool and thought I could totally do it. I started a show called the Ninja Starship with Jimmy McKnight. I interviewed writers, actors, and anyone I could that was in pop culture stuff. The podcast scene was so oversaturated so my genre was really going nowhere. Everything I put into it wasn’t worth it, I was traveling to meet people for interviews and basically losing jobs because I was always gone. This project of passion was going nowhere so I ended it.

But it only took 3 months for me to think of a new idea. I read Richard Rawlings Book, Blood Sweat, and Beers and realized he changed his dynamic and was able to make something very successful. I figured, why not start a show about something I actually like and that there’s not a lot of. Pop culture podcasts are a dime a dozen so I started a welding podcast. If I’m gonna start this show, I wanted to get Marcus from Weldporn, the biggest name in welding I know.

And guess what? I got him! I interviewed Marcus… in my closet.

It was just the beginning stages and the only place to record was literally in my closet. Regardless, it all steamrolled from there and I didn’t really expect it to get as big as it did. I started to get sponsorships for my show. I mean, Joseph’s gas in Canada flew me out, put me up in a hotel and took care of me completely. Now as things have grown, I have a studio in my house.

But don’t get me wrong, things did get stagnant but then I got the cover of Welder Mag and everything changed. A TV production company called me to help produce a welding TV show, the front page of my local newspaper. That was over a year ago and it hasn’t stopped since. I went from 400 listeners a week to 10k+ depending on the episode. There are other welding podcasts but they have their own niche. Mine is educational but it’s more of a social setting. I like having the face to face conversations. It allows me to look you in the eye and get those conversations going.

Who’s been your favorite guest?

I can’t claim a favorite because it would be unfair to my other guests. But Anytime Josh Welton from Brown Dog Welding, or the weld scientist, Nate Bowman. Whenever we get on the podcast together, magic happens. A half hour show turns into an hour and a half. It’s non stop and there’s never a dull moment. We talk about everything, we have a natural conversation. I like doing that with all of my episodes.

Which guest has surprised you the most with their story?

The most eye-opening interview I’ve ever done was with a guest named Kristina Harris. Her story about her journey into welding is one of the most intense and empowering story you’ll ever hear to just get and keep a job. It’s empowering, horrifying, all of these things wrapped up in one. It was just a real quick, random interview that turned into one of the most eye-opening events ever to see the industry from a woman’s perspective.

Who are your role models/mentors?

First and foremost, Jesse James.  Richard Rawlings, because he appeals to my ego. Cameron Davies, the owner of Kruising Kitchens; the guy is a powerhouse, I love his social media and look to him for inspiration all the time.

Do you think social media has helped or hurt the welding industry? And how?

I would say both but it’s definitely helped it far greater than hurt it. It’s made the industry more transparent and shows people all of the different avenues of the welding industry. It shows what they’re making, why and how. It shows people like me, who were stuck in a bubble, that there are way more options than they think.

In a negative way, it shows how many stupid a******s there are in this industry. The fact that they make negative comments about people who are looking for help, is out of control. I don’t understand the idiotic mentality, the basic caveman mentality that has no place in a progressive future. It’s great that there are all women shops and classes but the fact that we have to do it sucks. Why can’t we just have co-ed communities? There is no reason it should be that hard for someone to make a paycheck doing something they like or something they can do to provide for their family.

It’s also changed the art of conversation. People are used to short comments and don’t have the skills to talk to anyone anymore.

My go-to thing is a pair of welpers that I use for everything except for what I should use it for. They are like an extra set of hands. The Miller Dynasty is pretty much the king. As far as home-based, you can’t go wrong with what ESAB has given me. They’re reliable, easy to set up and durable, and have a wide range (to be able to dial in different alloys). OTC is another favorite of mine. They have a TIG machine that’s basically a computer that welds. This is the thing that can make a bad welder good and a good welder great.

How do you learn new welding skills? What books, videos, tools do you use to keep up with new welding trends?

I always learn stuff on the job. It’s the experience of multiple processes that allow me to try different things. For the average joe, go to school so you can learn everything you need for the job. It’s better to learn beforehand.

What advice do you have for others in the welding industry?

Be willing to sacrifice.

Welding sleeves or a full jacket?

If it paid better, shop life.

If you’re all about welding, Fabtech … Never been to SEMA but when Fabtech comes to Vegas, I’ll do SEMA

Dodge … (Family is all about Ford)

Vegas … I’m not a gambler, it’s just everything that is there. Or anywhere by the ocean

Last thing that made you go “huh?”

Outside of politics, probably girls being allowed in boy scouts

If you weren’t on the path you are now, what would you have done instead?

Voice acting. If I hear it, I can mimic it. I can do a pretty good Meatwad and Carl from Aqua Teen Hunger Force. I love animation and voice acting but never had a real opportunity to do it cause I needed to make money and pay the bills.

To learn more about Jimmy McKnight and the Arc Junkies Podcast, visit https://www.arcjunkies.com/