I decided to travel in style to the circuit so I hopped into the Arc-Zone.com green mobile (Toyota Prius) for the short 45 minute ride inland to the brand new Pala Raceway. They built an awesome new motocross track, just down the road from the world-class Pala casino in North County, San Diego California. 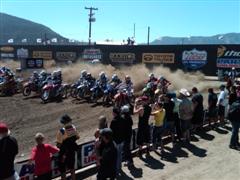 When I arrived, I headed to my base, which was the Thor/Parts Unlimited Team hospitality area for a bit of lunch. I was a guest of Mark Johnson, who was the former Team Manager for the powerhouse Team Green Kawasaki. Mark has worked with some of the greatest names in motorcycle racing: Eddie Lawson, Jeff Ward, Jeremy McGrath, Ricky Carmichael and more! Mark is now General Manager of the KV Racing Technology IZOD Indycar Team, and he works with David Brzozowski one of my best friends who is KV’s Team Manager– so that’s the connection!

I watched the final practice session from the race team timing and scoring area just past the starting line at the first corner-–perfect for catching all the action on track.  I also had a great spot for viewing the team TV’s, with the appropriate timing screens; I could really follow how all the riders were getting around the track. I could see each rider’s strategy, building up to the afternoon’s first moto.

It’s great to see the top riders up-close making laps and coming into debrief their mechanics. You can check out all my photos here:

But for me coming to a major event like this is really about catching up with people that I had raced with years ago and do business with now!

I had a few minutes to talk to Don Emler from FMF who has been the leading high-performance off-road motorcycle exhaust pipe manufacturer for more than twenty years. Don had purchased a Sharpie™ Hand-held Tungsten grinder and some ArcTime™ Hybrid tungsten electrodes. It was good to touch base with him and to talk about how the tools he bought from Arc-Zone improved his welding performance.  (You’ll see some awesome pictures of Don’s work in the slide show above).

All in all it was quite a day checking out all the race teams and their support equipment, watching riders from all over the world compete on an outdoor dirt track, and talking to the mechanics and seeing some old friends walking around the paddock.

See you there next year!