Build it, then Bill it

My sister Lori bought a house with some land in Ramona California. As soon as she moved in she began to convert it to the horse property that she always wanted; she needed some fencing to start. When she asked her fellow horsemen who builds the best corals and arenas, it was unanimous–“Hayes Fencing, they do quality work”.

Steve Hayes owner of Hayes Fencing in Ramona California and his son Ryan fenced the entire property, including a pasture, paddock, pipe corrals and stalls, custom steel cross-ties, hitching posts, a huge arena and obstacle course, tie racks, a wash rack etc. They built some things in their shop, but almost everything was welded on site with their Hobart Handler portable 110V MIG welding machine.

When Lori added a couple of goats, however, she needed to build up her fencing on one area of the goat pen– those critters climbed up to the top of that big rock and jumped over to the neighbors!

I was out visting Lori and was talking to Ryan about welding tools, welding helmets, protective gear etc. when I noticed Ryan was using a Profax MIG gun made in USA (available from Arc-Zone) I asked him about it. He said, “It’s good, but the local supplier has no parts for it.” The supplier actually suggested Ryan buy a new gun ($150) when all he needed was a gas diffuser ($3)! 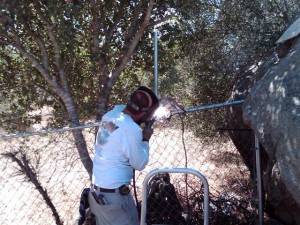 He was thrilled when I told him we had parts for his MIG welding gun in stock, and that he could order online. “It costs us a lot of time and money to roll into town and take our chances on being able to get the supplies we need– if I can get the parts and other supplies we need from Arc-Zone it will really help us be more productive.” Town, after all is about 20 miles away.

If you want to build a business and make a damn good living, you should look at the Hayes family. They work hard and do what it takes to get the job done right… When Lori needed some extra work done, Ryan came out on a Sunday to make some extra coin.

Don’t buy into all the media balderdash about no jobs, bad economy etc. This job alone was worth over $35,000! So get out there and start building and billing today!

What makes One TIG Torch better than another?

What makes One TIG Torch better than another?