Eight Caledonia Area High School students are revving up their welding engines to compete in a national motorcycle building contest — the 2010 Donnie Smith Chopper Class Challenge, taking place at the end of this month!

While it’s not quite Orange County Choppers or the hit TV reality show American Chopper starring Paul Teutul, Sr. and his two sons Paul, Jr. and Mike, a group of motorcycle builders from Caledonia are basking in the limelight just the same. 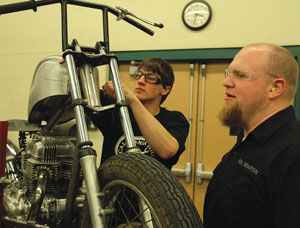 Eight students of Caledonia Area High School industrial education instructor Scott Martin hit the big time last week when it was announced the Caledonia Chopper Club has been selected as one of just five school groups in the United States to compete in a national motorcycle building contest.

The contest is called the 2010 Donnie Smith Chopper Class Challenge. Judging for the motorcycle-building challenge will take place March 27 and 28 at the St. Paul River Centre, St. Paul, Minn.

LENCO Welding Connectors Made in Missouri

LENCO Welding Connectors Made in Missouri

Welding Through the Night

Welding Through the Night