My first motorcycle was a 1963 Yamaha 80cc 80YG 2 Cycle 7.7 hp that I got from a grade school friend after her dad backed over it with his station wagon. 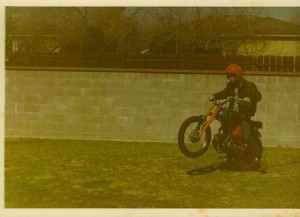 My Dad and I got to work – we straightened the frame, bobbed the rear fender, took the emblems off the tank, removed all the side plates painted it orange, chopped the seat down and we were ready to go racing!

Let’s Go Racing!
I will never forget that Tuesday night at Trojan Speedway or South Gate Speedway in South Gate, CA.  Trojan was a sticky little clay oval next to the LA river, behind the rock quarry, east of downtown LA.  The fog would roll in at night an keep the dirt nice and moist, like hero dirt.

On the way to the track, my Dad stopped at Kmart to get me a helmet,  we found a cool looking orange metal flake Grant helmet that cost $14.35. I remember thinking, “Is that all my head’s worth?”, my dad checked the specs, and it was Snell approved so we bought it!

Rookie Move
I was so excited when I lined up for my first ever heat race.  I got in position on the second row and when the starter moved, I dropped the clutch and jumped the start!

It wasn’t even close, I blew past row one and the starter! The worst part was, a bunch of my sixth grade classmates were in the stands with our teacher Mrs. Jackie Jacobson from Vista Del Lavalle grade school in Claremont CA. I was so embarrassed. . . 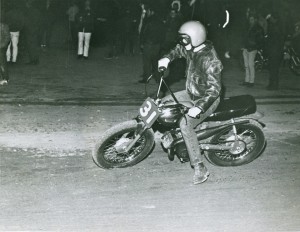 That first race was an eye opener — the other race bikes were much faster, and highly modified.  My dad taught me to reasearch what the winners were doing “that is your quickest way to the top”.  Based on that, we bought Floyd Clymer’s book “How to Tune a Two Stroke Engine”.

The Quest for Horsepower
The bike was a Yamaha 80YG with a 80cc 2 Cycle 7.7 hp rotary valve engine that was easy to hop up. We cut the rotary valve, bored the cylinder to .040″ over, installed a single-ring piston with a super short skirt.  Next we added two intake ports to the barrel for a total of seven. I topped that baby off with a bitchen radial head that was milled down for high-compression.  I replaced the fly wheel and magneto with a total loss ignition system.

We finished the engine modifications off with a custom tuned expansion chamber made by Dick Haycock from Chino CA. Dick custom fabricated and roll formed the chamber and artfully oxy acetylene welding it together.  He finished it off with a 7” long x 1/2” diameter stinger tip (shown in picture above) – that baby was so nervous it was like riding with an on off switch!