San Diegans are proud of their local Plumbers and Pipefitters union which has taken on the task of securing jobs for marines being discharged from the base in Camp Pendleton — nearly 750 leave each month.

They are currently offering free accelerated classes in welding to 16 marines at a time, in the hopes that this will provide them with a lasting career upon leaving.

A local union is offering men and woman leaving the Marine Corps a chance to learn how to become welders.

Organizers are hoping the program might spark some careers. 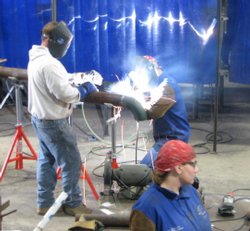 San Diego’s Plumbers and Pipefitters Local 230 is already into the fourth class of its Veterans in Piping program.

The union is offering Camp Pendleton Marines who are about to be discharged the chance to take part in a free accelerated welding program.

Union Organizer Gary Sallis said many Marines don’t know what they’re going to do when they leave the military.

“We’re taking 16 of them every month as we can to try to train them to be welders. And this way, when they get all done, they have a career when they leave the military.”