My first motorcycle was a Mini Bike – a Taco 44 kit that my neighbor and his dad decided was too much of a hassle to build. I traded my electric guitar for it.

My dad and I worked together to collect all the parts needed to build it. 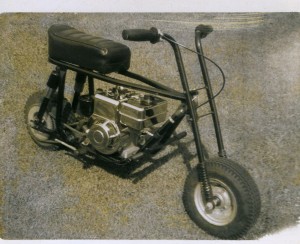 Centrifigal chain drive clutches were popular then but a bit unreliable and noisy, so we engineered a belt drive system with a double pulley jackshaft, and chain drive to the rear sproket.

It was connected to a variable speed clutch, which was installed on a polished and chromed out, performance tuned Briggs & Stratton 5HP engine complete with a Tecumseh down draft carburator and straight pipe exhaust!

We turned the flywheel all the way down to the magnets, milled the head and made our own copper head gasket, as the OEM one was a thick layered sandwich design.

My dad organized a trip to Tijuana Mexico to have our 1969 Dodge Dart reupolstered. I invited two of my grade school buddies, Steve Maxwell and Eddie Fagg from Vista de Valle Elementry School in Claremont CA. Each of us brought our mini bike seats to have them reskined with custom material, button-tucked and finished off with some nice edge piping. The last thing we did before painting the frame gloss black was to redesigned the friction rear brake and custom foot pegs, which we had heliarc welded at Foothill Welding in Claremont, California. 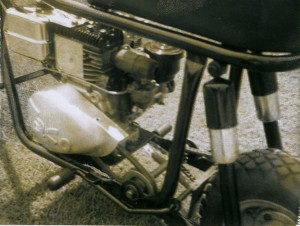 When we picked up the parts from the shop, I was intrigued by the heliarc welds the guy had laid down, so I asked him a couple of questions, and he showed me how to make a few myself!

My friends thought it was all so cool – the bike – the welding. Before long, they had started calling me “Joe Welder”, and I guess it stuck !

I had a lot of fun on that old bike – it was the first time I really learned about engine modifications.

One night my Dad came home and saw me doing a trophy run down the alley behind the workshop. He said there was a long white flame streaming from the exhaust and it smelled like it was burning up.

When I explained how I had added some nitro to the high-octane AvGas, he knew I was ready to move up to a real motorcyle.