When Did You Learn How to Weld?

What is the youngest age at which you think that someone could begin learning how to weld? 13?  14?

I remember being 8, and I don’t think I could have held a lit torch on my own, even if my parents would have let me.

So that begs the question:  How did he do it?

The he that I’m referring to is a one Andre Dusek of River Falls, Wisconsin.  He started welding, that’s right folks, at the tender age of eight, and now, two years later, at the ripe-old age of ten, he’s begun selling his own welded art creations. 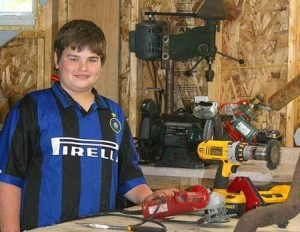 He said about the attendant, “He knows me so well now he lets me in even when it’s closed.”

Andre drags assorted parts out of the dumpster to make into artwork. A muffler here, a brake disc there, long chains, small metal rods, assorted-sized springs and other parts.

He totes his tools along and sometimes disassembles to get at the desired part.

As time allows, the youngster goes to — literally — his loft in the garage to create original works. Under his dad’s instruction, he began welding at age 8 and materializing his artistic visions.

Sometimes his mom, Nita, takes him to the dumpster. Other times he’s pulled a red wagon, ridden a bike, or hopped on his scooter to go.

Nita says the junk sitting around everywhere was cluttering the garage and especially dad’s workbench. She wanted to clear space and dad wanted his workbench back.

Especially after their artist son created and sold 15 pieces and people began making requests, they knew they needed a plan.

View from inside the Welding Helmet

View from inside the Welding Helmet