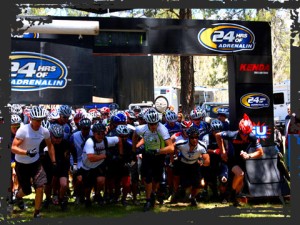 THE STORY
I’m an avid mountain biker and have a group of guys I ride with most every weekend. One of the guys said “Hey, let’s do the 24 hours of Adrenalin race.” It sounded cool, so we formed a team. 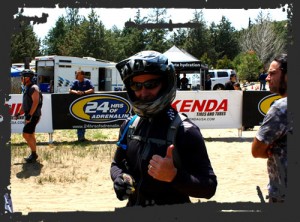 I had raced motorcycles in TT, flatrack, scrambles, and Gran Prix events like Hopetown and Barstow-to-Vegas but, that was a long time ago and I was not prepared for the events that unfolded. First off, I was shocked at how many completely buffed-out people had signed up for this event– men and women who take this stuff seriously. I had to train, Unlike my dirtbike I couldn’t just bolt on a new pipe or add some nitro if I wanted to go faster. I had to completely modify my diet, that meant no more In-n-Out Burgers! Instead of nitro in the tank, I found myself mixing different kinds of chemicals—fuel for my body. This is how it went down; A special drink one hour before, followed by another 15, and 5 minutes before I started my ride. Once racing it continued, 15 and 45 minutes into the ride, then immediately after my stint I mixed a “recovery” drink and ate some pasta. The rest of the time was spent trying to catch a few hours sleep and working on my bike and gear. I repeated the process four more times in the 24 hour event. I hope I never see another package of GU energy! Not even the Cappuccino blast sounds good now.

The race started at noon with a “Lemans style” 1/8th mile foot race to the bikes. After the runners made it through the start shack the next challenge was to get your bike off the rack at the same time as the other racers – let the racing begin!

We left the campground and got onto the trail, a long gradual climb to the first checkpoint. Once we cleared it, there was an exhilarating descent into a wide flat and beautiful meadow. 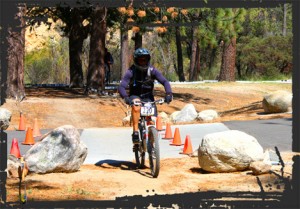 There were a few G-outs, roots, ruts, and many small troublesome rocks. One of the coolest features of this section was a deep G-out with a ladder crossing– hit it wrong and your in the dirt– hard! If you hit it just right, you could get some nice air!

The ride through the meadow was super fast and scenic. It was a gradual climb through the semi-loose and often sandy double track, ending with a short steep climb over hardpack to Checkpoint 2. Just when you think the climb had ended, you realize there’s still 100 yards of uphill fire road! After a little flat fire road, it transitioned to a single track and the second descent.

Then the fun really began– downhill fast and tight. The descent was a flowing single track, very technical at times, and fast. The trail flattened out and got sandy with a little bridge crossing, a small uphill, and then a WIDE open two- lane downhill fire road.

The fire road ended with a hard left turn and a giant supercross style burm. Aside from the braking bumps on the turn, the turn was awesome. If you missed your braking point there was an alternate turn –not near as fun but it allowed you to hang it out till the last second.

This is when you want to make sure your bike is ready for action. My current bike is a semi-high end “retail” bike from Trek – it’s a Project One custom from the Trek factory. Made in Taiwan, this strong, mass produced bike has a nice TIG welded aluminum frame. 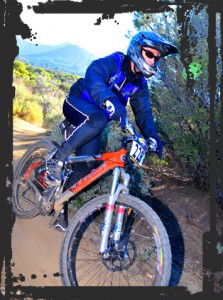 The trail went down again, across a dry creek and a into a quick, tricky path that twisted up, left, then over rocks. From there I went on to a serious heart attack climb—the climb that made me glad I gave up the burgers! This one was for real– steep, technical and long. . .

Next up was an undulating, sandy single track followed by a short climb and some big Volkswagen sized rocks– the course was marked “Rock Climb”. There were multiple lines, Left = crash, center, and right. I went center but could not manage to clean it. . .

After some more climbing, came the third descent. It was similar to the second but not as long, and there were more rocks. At one point there were several people cheering me on– as if I needed that in one of the most treacherous sections of the track.

After the descent, there was about a mile of sandy double/single track that lead to a paved road. Now you can do the Lance Armstrong – hit the big chain ring, drop your head, and stretch out your arms for about half a mile before a hard right and back into the dirt, hitting some double track before the final climb named “The DEMORALIZER”. It’s just what you need to keep the other hotshots from smoking into the campgrounds like they rode the whole lap at that speed! 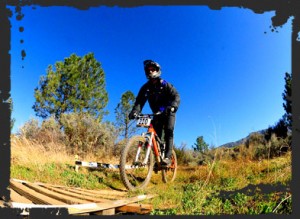 After the climb was a tight, FAST single track with plenty of nice whoops. Then came a sandy right-hander, crossing a pallet bridge over Hurkey Creek, towards the finish line.

That was one lap – the race was to see how many laps our team could complete! I can say that we finished 8th out of 12 teams – not bad, considering our top gun went down with a nasty muscle pull at the half way point. The guys felt like we could have been in the top five – lets see what happens next race!

I mentioned my bike, the Project One from Trek, but let me tell you, the pits were loaded with custom designed, expertly TIG welded aluminum frames. The other bikes were from a variety of manufacturers: Ellsworth, Titus, Foes, Specialized, Intense, Gary Fisher, Cannondale and more. For mountain biking you need to have a lightweight, strong frame to carry you up and down those hills and you don’t want any of your welds to fail.

When welding specialized metals like aluminum or titanium, you want to make sure you get proper penetration and good gas coverage to minimize contamination in the weld—otherwise you’ll end up with substandard welds and maybe even a broken bone or two!

Arc-Zone recommends ArcTime™ Hybrid tungsten – it’s good for all metals and all machines. We also recommend weld specialized metals with precision designed and Performance Proven™ trail shields, flooding cups, purge cups and other innovative purging devices. These products can be found on Arc-Zone.