A buddy of mine sent me a copy of a letter he has written to President Barak Obama, and with his permission, I’m posting it here. Dan Allford from ArcSpecialties in Houston, TX I first met Dan when he came to San Diego to do a technical presentation at the local AWS section meeting on behalf of Arc-Zone.com. At the time our Sales Manager was Mr. John Dimock, who knew Dan personally and invited him. Dan came in and put on an outstanding presentation about automated welding systems and related equipment. His company builds some highly engineered equipment and since that time he has been gracious with his time, helping several of our customers improve their operations. 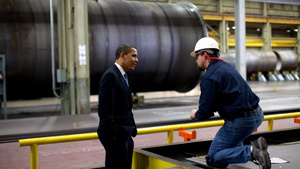 When I read Dan’s letter to the President I was impressed that it clearly tells the story of a real person trying to build something of value, and it includes facts — no emotion, no negative attacks — about the shift that has taken place in the American economy, a shift which clearly is not working.

Thanks Dan for taking the time to put your thoughts in writing — I hope you get a response, and more importantly I hope we as a nation can get back to building things of value — preferably out of metal!

You too can let President Obama know your thoughts. The White House website is easy to navigate– and you can use the easy Contact Us email form, or go old skool and write a letter.

I am writing today to express my belief that the bail out of financial
institutions with tax payer dollars is wrong. Private liability should
not be covered by government debt. I believe failure should be
punished. I encourage you to cease such payments and instead prosecute those in the financial sector and government who have committed fraud and embezzlement.

I own a small company which builds robots and other industrial
machinery. I just paid the corporate taxes for my company for this
quarter. An amount many times larger than my salary.

What will the US government do with this money? As part of the
$800,000,000,000 bail out, my corporate taxes will only pay a small
portion of _one_ of the bonuses which the banking industry paid its
executives.

Had this money remained in my company here are examples of how we have historically spent it:

1. Continue to reduce the trade deficit by building and shipping
30% of our total sales overseas (data from 2008)

2. Continue our research into new industrial techniques which
has resulted in 2 patents granted, with several more pending.

3. Purchase American made equipment which we use to build our
products. In 2008 we purchased 5 new machine tools using corporate
equity. This is in spite of a 42% tax rate penalty for using equity
financing rather than debt financing!

4. Pay for the continuing education of our personnel. We
currently are paying for books and tuition for several employees
enrolled in school.

5. Pay for 100% of the health, life and disability insurance for
our 45 employees and 33% of their families.

When hurricane Ike struck Houston, my company suffered over $100,000 in damages which were not covered by insurance. We did not receive any government assistance.

When I started my company in my garage 25 years ago, I did not receive any government assistance.

When I struggled during the early 1990s, I held my paychecks, and used my savings to survive, without any government assistance.

I have never asked for or wanted a bail out. All I ask for is a level
playing field. Now I see that the US Government rewards failure, fraud
and embezzlement, using the wealth generated by fiscally conservative hard working citizens.

Will the next generation of entrepreneurs be willing to risk everything, and work late nights when they realize that success is punished and failure rewarded? I believe in the USA, never before have I felt that the system was unfair as it is now. I am disillusioned and disappointed.

Stop the looting and start prosecuting if you want to restore our
faith in the system.