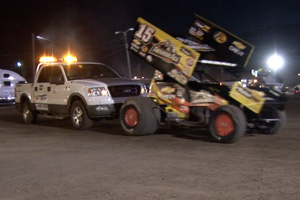 Recently I headed up the road to the Tulare Fairgrounds for the World-of-Outlaws Sprint Car Race!

Tulare is located in the Central Valley of California, “the nation’s bread basket”. They call it that because of all the agribusiness. And I have some history in Tulare, my family farmed in the valley for generations — they had several big ranches and dairy barns, that’s where I learned to love the dirt.

I know it sounds strange, but growing up I always looked forward to going to dirt race tracks with my family. I began amateur motorcycle racing and that passion for competition ultimately lead me to build my own cars and form a Sprint Car Team. I still love the dirt and I ride my mountain bike at least 3-days a week in the local mountains.

I took Matt with me — he’s Arc-Zone’s Director of Video and Graphics. We brought all the gear to video the action. I wanted to share some of the things I love about motor racing and show how it relates to the welding/metal fabrication market.

At the track we met up with “Hollywood” Mike Sweeney my friend and former driver in the CRA Sprint Car Series (I talked about him on a previous post). We also met long time friend World of Outlaw driver Jac Haudenschild a superstar in the dirt racing world. Picture below: That’s me with Jac– Driver of the City Wide Insulation # R19 Owens-Corning Outlaw Sprint Car in front of his transporter (nice toolbox!) 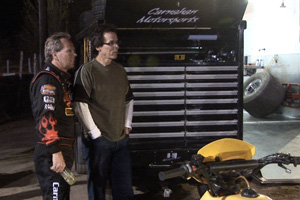 We talked about the new cars and old friends. Jac told me he is putting a winged Sprint Car team together for his son Sheldon and he has been fabricating some of the parts needed to get him on the road.

Jac mentioned our mutual friend and former driver– now TV personality (and part time welder) Brad Doty (also a Hall of Famer) was having trouble finding the right remote amp control for his Lincoln TIG machine. Jac suggested I contact Brad and get him dialed in… That will be another post!