If you’re into automotive fabrication and want to improve your skills, then take a look into Lincoln’s Motorsports Welding School, which hosted an Advanced Motorsports Welding seminar this past December.  In attendance were some of the best team fabricators in the racing industry, representing NASCAR, IndyCar, NHRA (National Hot Rod Association), USAC (United States Auto Club), World of Outlaws and several others.  Lincoln’s comprehensive welding knowledge benefits the industry by helping teams, sanctions and manufacturers make their cars more competitive and safer to drive.

Welding schools like Lincoln’s did not exist in 1979, when Arc-Zone.com owner and founder Jim Watson was a member of the World of Outlaws Sprint Race Car Team.  Though based in Los Angeles, California, the team raced in 22 states and Canada. Jim was the Chief Mechanic for the team, which competed under the name James Gang #15. The car was a kit car that Jim assembled and it was accompanied by a transport trailer that Jim and the team also built. 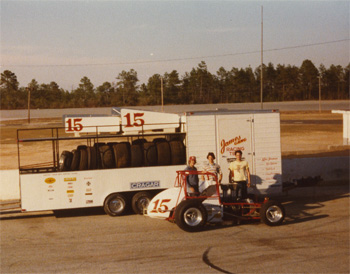 The James Gang #15 Team pioneered the large custom transporter; until the completion and arrival of the team’s transporter, competitors used small open trailers.  The transporter that Jim and his team constructed was completely enclosed, contained a fully functional workshop, and contained all the necessary spare parts required to run the entire 80 race series.  The transporter that Jim and his team built was truly years ahead of its time and the application of welding was instrumental in its construction, as well as the construction of the team’s sprint car.According to Jim, “TIG welding was an important application-for strength and aesthetics-because not only did we want a strong car that could perform well, but we wanted a car with nice, clean welds that looked good, too.  Other processes were important; too, because access to a TIG machine wasn’t always possible, so Stick and MIG welding were important as well.”

Jim says when he was involved with the World of Outlaws Sprint Race Car Team, they did not have the option of enhancing their skills at a school such as Lincoln’s, simply because they did not exist during that time.  Jim says, “It is a good school and they run a top-notch program… I wish something of the sort was available when I was involved with the team.  I highly recommend anyone interested in motorsports fabrication attend the school.”

Technology has made enormous advances since Jim’s time with the World of Outlaws Sprint Race Car Team.  Welding equipment is more efficient and schools such as Lincoln’s and WyoTech offer welders and fabricators a chance to gain new knowledge in order to enhance their skills.

“Everything is different now. Tools are better, torches are lighter, smaller and cooler running.” Jim adds with a smile, “I wish I knew of a supplier like Arc-Zone!  The majority of welding shops I went to did not have a clue about specialized fabrication”

With schools such as Lincoln’s and Wyotech becoming more mainstream, it’s only a matter of time before such knowledge becomes commonplace.