Joe Welder on the Internet Frontier

I have always been an outlaw. When I was a chief mechanic on a winning World of Outlaw Sprint car team my huge silver belt buckle was inlaid with turquoise letters – O U T L A W .

Even when I started Arc-Zone.com I was a bit of an outlaw, and a bit of a pioneer. We were the first to sell welding accessories online– I started with an eBay store, then we moved to a customized webstore built on open source code. We sell direct to consumers, and we sell to distributors. We have some items manufactured for us, to our specifications. And we don’t just sell product in California, or even some pre-defined western region, we sell worldwide. That really confuses manufacturers that have a regulated, pre-defined distribution system– a system that is sometimes hard to break into. In other words, some of the vendors we have dealt with have not really known which box to put us in.

Whether you’re an outlaw or a pioneer, or a little bit of both, one thing you’ll need when you have a business is a lawyer. Now I know everybody throws down on lawyers – but like it or not, if you plan on starting a business, or you are in business now, you will eventually need one.

I was lucky to find a good law firm early– Branfman and Associates. Before I even launched the company I asked advice on trademark and domain name issues, learned where I needed to start with preliminary name searches, what the difference is between a ( TM) and ( R) in terms of trademark, and how to protect your intellectual property. 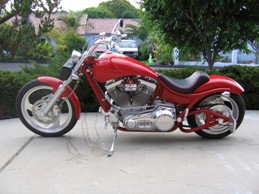 And they are not just your stuffed shirt attorneys either. We had lunch the other day, and I discovered that Mark has a custom chopper. “It’s pretty fun and loud as all get out,” Mark says… and it should be fun, it’s a 2003 Bourget Pro-Gets Classic. A highly engineered bike with no oil tank! The oil for the entire bike circulates through the frame. It’s an awesome idea that improves performance by adding more oil and utilizing the surface area of the frame to dissipate the heat, keeping the engine running cool and efficient.

I have been with Branfman for 10 years and they have helped me in many ways. The more your business grows, the more people (vendors, customers, employees etc.) you deal with — the more you will need a GOOD Lawyer, one you have a solid relationship with.

Recently we were jacked around by a vendor…. This company has a reputation in the industry for being jerks but when we were just starting out, trying to establish resources for quality product we put up with their shenanigans. We were trying to build a reputation for ourselves as a company that puts customers first. I’m not saying we haven’t made mistakes, but hopefully we’ve handled them with integrity. And so we put up with this vendor for longer than we should have, but we documented each incident along the long road.

Recently they not only cut us off (after we have spent thousands of dollars with them), they had some rinky dink lawyer of theirs send us a childish letter. When we didn’t respond, they got their big guns fancy Beverly Hills attorney involved and made all kinds of ridiculous accusations trying to scare us. The fact is, they are jealous of the reputation we have built, the customer loyalty and the solid relationships we now have with quality manufacturers and our position in the market.

Now if we hadn’t already had a good solid relationship with a reputable and knowledgeable law firm, we would have been in a panic. As it stands, we’re able to let the attorneys deal with it and we can get on with the business we are in– delivering precision welding products, value-added services and technical solutions to customers worldwide.

If you have a business, make sure you have a good attorney on your side. Start early and build a relationship with him/her so they get an understanding of who you are and what you are trying to do. A good lawyer can direct you away from potential landmines that can derail your business and waste time and money – and in business both are very valuable!

Document your business dealings – and most importantly – don’t let people push you around – Push back and if you’re prepared – push back hard, then move on to growing your business!

Weld with a Cool Head

Weld with a Cool Head