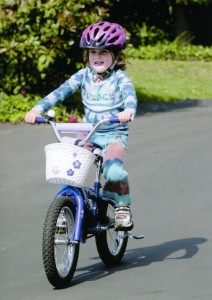 Sometimes things happen around you and you may not realize the significance and the long-term effects. I think about things more now that I have a five year old daughter.

Take some of the changes apparent in the world of racing. I remember my Dad telling me that my Mom was not allowed in the pits when they went racing – she had to wait outside the pit gate — now women are winning races!

As an early teenager I remember racing AMA district 37 TT motorcycles at the Ventura County Fairgrounds. The track was yards from the beautiful Pacific Ocean. I lined up for the qualifying heat and next to me was a young (girl) women with long blonde hair hanging out of her helmet — she had bitchen’ white riding leathers with purple lettering “T&O Yamaha” which was her sponsor — I remember thinking to myself, What is she doing here?

My dad told me, “You better pay attention. I watched her practice and she is fast”

Dad was right. I ran second that day. I don’t remember who came in first, but she came in a very respectable fourth.

Here are some facts on some women pioneers in racing:

Shirley Muldowney broke the glass ceiling in the NHRA in the 70’s and now Ashley Force and Hillary Will are winners….

Though it is still very early in the season, 2008 is quickly becoming the year of the woman. Following historic wins by Ashley Force and Melanie Troxel, Hillary Will added her name to the short list of female Professional winners when she defeated Larry Dixon in the Top Fuel final at the O’Reilly NHRA Summer Nationals presented by Castrol GTX at Heartland Park Topeka. Will is the 11th woman to win in the Pro categories. 2008 we had the first major open wheel race win by a woman– Danica Patrick.

And as I watch my five-year-old daughter tearin’ it up around the neighborhood on her bicycle– without training wheels, I might add– I wonder what the world of racing will be like when she grows up.

The Art of Motorcycling Past, Present and Future

The Art of Motorcycling Past, Present and Future