You may or may not know about Tesla, the swankiest 100% electric car on the market. They started up production a couple of months ago: 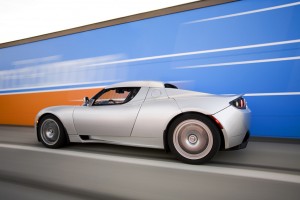 San Carlos, Calif. – (March 17, 2008) — Regular production of the 2008 Tesla Roadster commenced today, marking an historical milestone for Tesla Motors and a watershed in the development of clean, zero-emissions vehicles.

First unveiled as a prototype on July 19th, 2006, the revolutionary Tesla Roadster generated an extraordinary response from people everywhere who were inspired by the vision that beautiful, high performance cars could generate zero-emissions and burn no oil.

Here, Tesla’s engineer explains to Inside Line how the much anticipated electric roadster works: 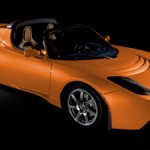 And now they’ve opened their first store in Los Angeles a couple weeks ago. I can only wonder how long it is before our own Joe Welder trades in his Prius (and his house) for a Tesla– it even comes in Arc-Zone Orange!

Tom OLeary, General Manager of the new Tesla store writes on his blog:

The Tesla Roadster is a revolutionary car and our Tesla Stores will be no less revolutionary as an automotive retail experience….. continue reading at Tesla Motors–>

Through the course of development of the Roadster, Tesla Motors has established a leadership position in EV technology which it plans to extend over the next years, leading to the introduction of its next model, a five passenger sports sedan, in 2010.

Tesla Motors develops and manufactures electric vehicles with exceptional design, performance and efficiency, while conforming to all U.S. safety, environmental and durability standards. The Tesla Roadster is the only highway capable production electric car of any kind for sale in the United States.

With a 0 to 60 mph acceleration of 3.9 seconds, a 13,000 rpm redline, and the fastest top gear acceleration of any production car tested by Car & Driver magazine in 2007, combined with an EPA rating of 135 MPG equivalent, the Tesla Roadster is unique in providing super car performance at twice the energy efficiency of the best hybrids. For more information, visit www.teslamotors.com.