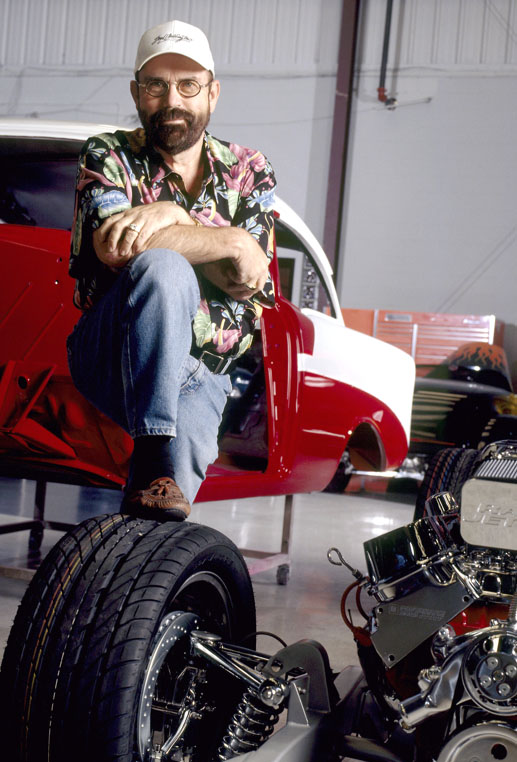 We here at JoeWelder.com wanted to take a minute to make note of the passing of a pioneer in the So Cal hot rod lifestyle, Boyd Coddington. I first heard about Boyd when my good friend Randy Haberman was building his ’32 Ford 3 window coupe… that was back in the ’70s. Before T.V. when Boyd had more of a cult following, based on his ’32 track roadsters. He and L’il John would come out to the races where they’d watch master sheet metal fabricator Steve Davis’ beautiful CRA Sprint Car run at Ascot Park.

Boyd Coddington was at the forefront of the whole “SoCal lifestyle” of fabricating and customizing hot rods, and he will be missed in the hot rod and metalworking communities.

Anaheim, CA (PRWEB) February 28, 2008 — Boyd Coddington, the creative visionary who took hot rodding to an art form and custom wheels to a new level dies at 63. Coddington who was a long-time diabetic died from complications that were brought on from a recent surgery. It was Coddington’s ever forward-looking view at the design of the hot rod and his unconditional desire to create the finest quality cars that became the “Boyd Look”.

“It is a major loss for the automotive enthusiasts and hot rod aficionados around the world. Boyd Coddington did so much more than create automotive trends, he also built the finest hot rods. He was entertaining on his TV Show (TLC’s- American Hot Rod) and an ambassador who educated,” said Harry Hibler, former publisher of Hot Rod Magazine.

Coddington grew up in Idaho and was a car enthusiast from a young age. At age 12, young Boyd traded his prized shotgun for a Model A Ford, this began the legacy of the “Boyd Look”. Moving to Southern California to chase his dreams of chrome and customizing, he first worked as a shop machinist at Western Gear. Then in the 1970’s, Coddington found work as a maintenance repairman and machinist at Disneyland. Coddington would recount fondly his experience at Disneyland and the companys desire for perfection, a trait that he instilled in everyone who worked at his hot rod shops.
Coddington’s first major opportunity at developing the “Boyd Look” was when Vern Luce bankrolled a dream. The “Vern Luce Coupe” was Boyd’s vision of what could be done to create the ultimate 1933 Ford hot rod. Boyd would refer to his look as getting rid of the bumps and allowing the lines of the car to show. Coddington removed door handles, hinges and massaged the body dynamics in a way that no one had ever realized. To make the Vern Luce coupe even more dynamic was his trademark use of billet aluminum to create parts that were unique to evey hot rod. The result of his first creation was the prestigious “Sloanaker Award”, which was the first of many.

Over his 30-year reign as the “King of Hot Rods”, Coddington created dozens of hand-built hot rods and custom cars. Coddington has amassed numerous awards and was the first builder to ever win the America’s Most Beautiful Roadster (A.M.B.R.) award six times. Collectively, Boyd created more respect for hot rods than ever thought possible, his hot rods have been shown in Museum exhibits and even on the cover of Smithsonian Magazine.

Boyd Coddington was also an entrepreneur with a driven desire to build his company and see his goal become reality. In the 1980’s, Boyd literally reinvented the wheel by creating the billet wheel for hot rods. Coddington and long-time friend Lil’ John Buttera found they could machine practically anything they needed from solid aluminum. It was Coddington who took the idea and made it commercially viable. In the 1990’s, his hot rod shop and wheel company had grown and was so successful that he took the company public in an I.P.O. on NASDAQ.

Boyd Coddington was less known as a father of five boys and a man who had an infectious laugh. To many he was the under-the-gun, deadline-stomping star of “American Hot Rod” a persona that led some to believe he was cantankerous. Actually, Coddington was a humble and somewhat shy individual who loved kids and was a true philanthropist. Coddington has continually employed those who were mentally challenged and gave them a welcome environment in which to learn and work. Through his “Coddington Foundation”, Boyd and his wife Jo gave to the community of La Habra as well as to an array of national charities.

Boyd Coddington was honored during his life as Hot Rod Magazine’s “Man of the Year”, he was inducted into numerous Hall’s of Fame. His hit TV show “American Hot Rod” brought world wide notoriety and corporations sought his talents. The “Boyd Look” will live on and his spirit will forever remain the hot rodders inspiration.

For additional information or photos contact:
bonspeedMedia at 714.666.1999 or info @ bonspeedMedia.com

Thoughts on the Weldcraft-Miller Consolidation

Thoughts on the Weldcraft-Miller Consolidation

When Your Weld Really Matters

When Your Weld Really Matters