From Sprint Cars to Tungsten Grinders and back

I got a call the other day from a prospect who was researching the benefits of using a tungsten grinder verses a wheel grinder. He came across our site, read our tech articles and then called.

He said “We’re a couple of farmers that have been trying to do TIG welding for a couple years and have never gotten good at it.”

A friend told them about Arc-Zone.com and the Sharpie Tungsten Grinder.

He told me they had a little fabshop and a small dirt track in southern Indiana.

“What’s the name of the track?” I asked.

“You probably never heard of it– TriState Speedway,” he said.

Let me tell you I think I heard his jaw drop when I said, “In Haubstadt Indiana! That’s where we won our first World of Outlaw Main Event in 1979!”

I will never forget that night. We broke a front torsion bar mount in the heat race, and I had to Arc Weld it back on using a portable gas drive Stick Welder. We ran good that night and beat the pants off of Steve Kinser, Doug Wolfgang, Sammy Swindell, Rick Ferkel, Shane Carson, Bobby Allen and more!

He was blown away and began to talk about how he helped Billy Vukovich for several years with his Champ Dirt cars, and asked if I was related to AJ Watson. I said no, but ironically we both lived in Glendale CA., of course AJ lived there before my time as he worked for the famous car builder Frank Kurtis from Kurtis Kraft.

We had a great conversation and I really enjoyed it. I’m amazed how many people I’ve met, and continue to meet through my racing past. 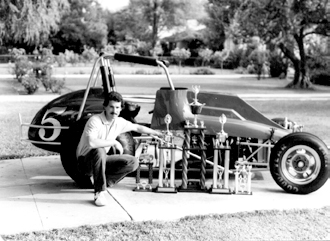