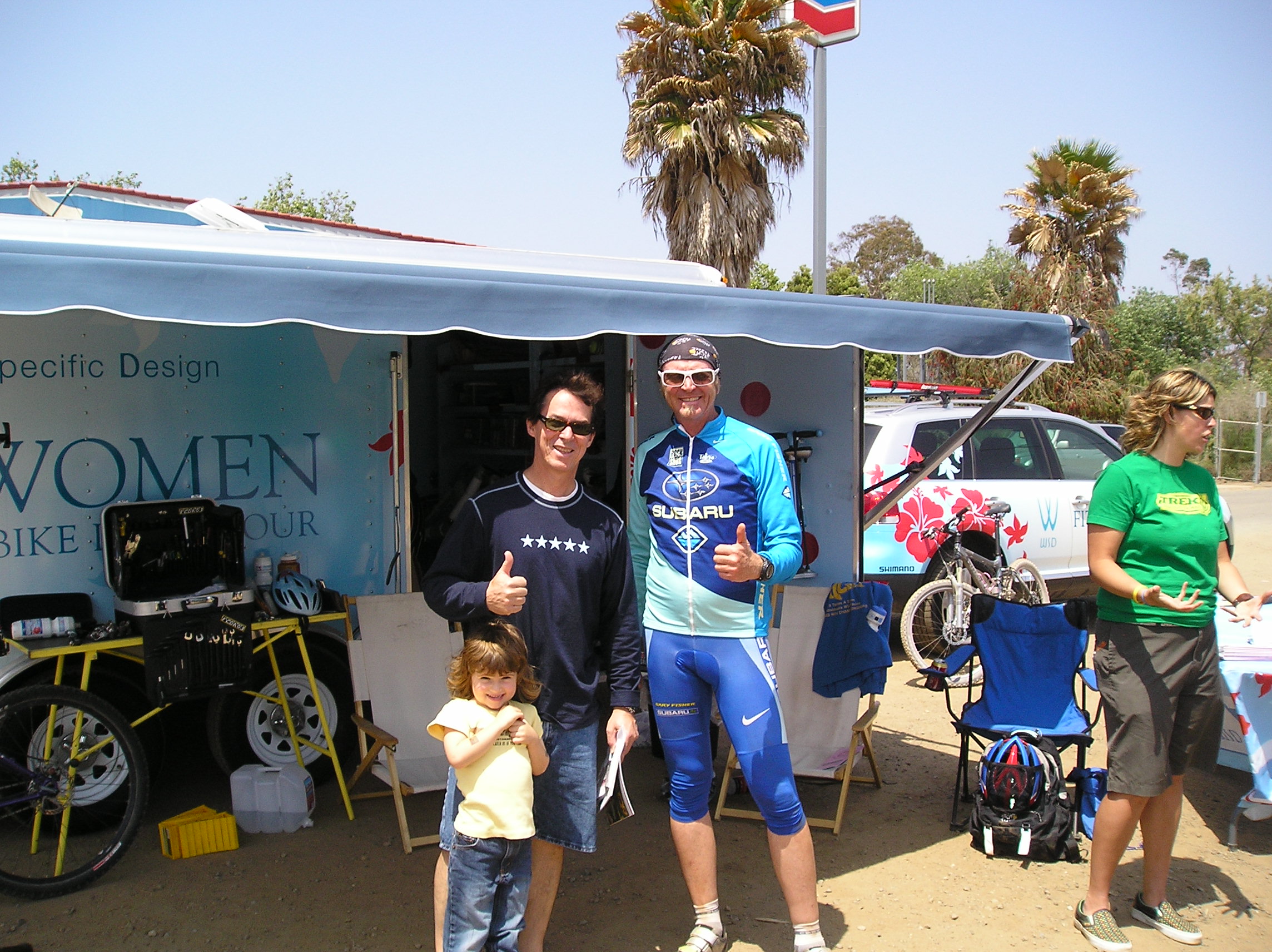 On Sunday, my buddies, Long Chain John, Surfer John, Dr. Eye and me met at our usual spot next to I-15 north of San Diego on the banks of Lake Hodges we ended up parking on a portion of the ladies mountain bike skill training track they set up– It was so cool @8.00 am they were meeting to do an off road riding clinic – One of the ladies came over and told us to move! (we did)

We got suited up and rode over to the Trek/Gary Fisher demo compound. I noticed this dude that had a cool look and I could tell the way he was talking to the bike mechanics that he knew what he was talking about. I told my riding buddies I thought that was Gary Fisher.

I went over and asked a question about the pedal he chose, and he looked up and said “Hey man I’m Gary Fisher what’s your name!”

We talked about suspension and frame geometry – I was impressed with how passionate and technical he is. One of my friends asked him a question about his GF Cake bike that suffers from chain suck (that’s technical way of saying the chain comes off). Gary was very informative and had some great tips for his issue, and for general bike set up and maintenance.

When I asked him if he was a fabricator – at first he snapped back, “No. I wanted to build a big company. I wanted to build and sell great bikes. I didn’t want to be the one man shop.”
Later, however, he did admit that you do get a great feeling of release when you’re fabricating a nice part, “but I wanted to do something big so we sent all the production work out to established shops,” he said.

We talked about Arc-Zone and soon began talking about precision TIG/GTAW Welding and before long we were talking about TIG welding Titanium.

Gary said then when they started with titanium, it was like black magic, very few people had the expertise to weld it — and in fact, developed the technique and then taught Sandvik Metals how to do production TIG welding of titanium.

We went on to talk about the industry, and the component suppliers – it was great because he shares many of the same views I do about product quality and how the consolidation of the industry, and shifting production has had a negative effect on most products.

Gary demonstrated the differences between manufacturers by comparing the front forks on the four bikes that me and my friends rode. I had the one he liked best, a Trek Fuel 9 Pro I Series with its fork manufactured by Fox– the best engineering, manufacturing, technical support and best repair facilities — the whole package. (by the way, that’s what we strive for at Arc-Zone!)

I asked about the new 29″ wheel full suspension bikes or 29er’s – about the performance advantages.

“When you ride there is a pecking order, some people are much faster and they are always out front, with this bike you can be out front,” he said.

After our 16 mile (25.75km) ride we stopped at the compound where there were a couple of VW Touregs with large trailers filled with bikes – but no 29ers! We should have demoed one first thing in the morning!

It’s not like me, but I went back later with my daughter Siena to get a picture of Gary Fisher so I could write this blog post.

I didn’t see him at first and was ready to leave when I saw him in a chair under the ladies demo trailer canopy. I was nervous and Siena said “Daddy I want to meet Gary Fisher.”

In the photo above, that’s Siena wearing her favorite Race Girl T-Shirt signed by open wheel racing champ and soon to be Nascar star AJ Alimendinger

Siena’s already seen her share of top performers in many fields, we are blessed.