In honor of the passing of Rosalind P. Walter, one of the original Rosie’s, we’re shining light on the famous face of Women Who Worked on the Home Front during World War II

Rosie the Riveter is the most iconic symbol of women’s empowerment. For over 75 years, the painting featuring a bandana clad woman with her sleeves rolled up, is the literal poster child for work in the trades industry. Many people know her face but did you know that most don’t know whose face it is?

The most popular reference of Rosie is in Rosie the Riveter, a song written by Redd Evans and John Jacob Loeb in 1943. Inspired by [1] “Rosalind P. Walter, a Long Island women who was a riveter on Corsair fighter planes,” the song tells the tale of a little girl who is [2] “making history, working for victory” and doing “more than a male will do.” Even though Rosalind sounds like the perfect inspiration for the poster, she is not the woman behind the famous face.

After the song’s release, Norman Rockwell, one of the nation’s most popular illustrators, drew a rendition of Rosie; however, his version was less feminine than the one we know today.

Using Mary Keefe, a Vermont woman, as his model, Rockwell portrayed Rosie as masculine with hefty arms and a large rivet gun. [2] “She’s big and dirty. She’s oversized, with working-class brawn. She has no wedding ring” and is wearing men’s clothes. Rockwell’s Rosie depicts masculinity as power while the Rosie we know depicts a strong, motivational woman.

But was that what she was meant for all along? Was Rosie designed as propaganda to draw women to the workforce while the men fought diligently during World War II?

The answer is no. In fact, the wartime industrial poster, painted by J. Howard Miller, was never meant for the entire nation to see. It [1] “displayed briefly in Westinghouse Electric Corporation Plants” and “was intended only to deter absenteeism and strikes among Westinghouse employees in wartime.”

Even though [3] “Rosie became one of the most successful recruitment tools in American history, and the most iconic image of working women in the World War II era”, the woman responsible for the movement was unidentified for nearly 75 years.

It took one man six years to uncover the real Rosie.

In 2010, Dr. James J. Kimble, [1] “an associate professor of communication and the arts at Seton Hall University in New Jersey” embarked on a quest to uncover the real Rosie. He landed first on [1] “Geraldine Doyle, who in 1942 worked briefly as a metal presser in a Michigan plant.” Doyle believed herself to be the woman in a newspaper photograph published the very same year she began work at the plant.

In all fairness, the picture is a profile of the woman’s face and it wouldn’t be shocking to find that many women believed it was them in the photo.

For years, Doyle was identified as Rosie so much so that it was mentioned in her 2010 obituary. Without any proof that Doyle was in fact the real Rosie, Dr. Kimble continued his search and came across [4] “a copy of the photograph with the original caption glued on the back. Dated March 1942 at the Naval Air Station in Alameda, it identified ‘Pretty Naomi Parker’ as the woman at the lathe.”

When Dr. Kimble met with Naomi Parker, now Naomi Parker Fraley, she wasn’t shocked by his findings. [4] “In 2011, at a reunion of female war workers, she saw the Acme photo of the woman at the lathe on display and recognized herself. Then she saw the caption, with Geraldine Hoff Doyle’s name and information. Fraley wrote to the National Park Service to correct the error, but got nowhere, even though she had kept a clipping of the photo from a 1942 paper with her name in the caption.”

In 2016, Dr. Kimble published an article, Rosie’s Secret Identity, detailing his search and the real Rosie was finally brought to light. Kimble says, [4] “I think the most important thing to her was her identity. When there’s a photo of you going around that people recognize, and yet somebody else’s name is below it, and you’re powerless to change that – that’s really going to affect you. The idea that this journal article, and the media picking it up and spreading the story, helped her regain her claim on that photo and her personal identity was really the big victory for her.”

After 75 years, we now know the face behind one of the most iconic women in the nation’s history. J. Howard Miller’s rendition of Fraley will forever be one of the best propaganda campaigns our nation will encounter. Rosie the Riveter not only motivated citizens to provide relief to the war effort and boosted the country’s morale during wartime but inspired future generations of women to accomplish whatever they set their minds to.

We can and we will do it!

It’s hard to believe that Jim started this business over ten years ago from his garage!  Jim’s inventory was limited back then, but now we’re thankful for the awesome space that is the Arc-Zone warehouse where we can stock tons of welding product.  In addition to the warehouse we have the Ultimate Weld Shop (TM) and soon a revamped retail zone.

Most thankful for our welding customers

Oh, and best of all we have some of the best customers in the welding industry. We are always so inspired by the awesome work they’re doing, and we learn so much from them.  We have customers who are welding experimental aircraft in their back yards, we have welders working in the armed forces, and we have customers who run super high tech automated welding systems.

We’re also thankful for innovations in the welding industry

Here are just a few:

Inverter power supply technology that made welding machines so much smaller.  You can read about the history of welding power supplies, and the switch from transformers to inverter based power sources on the Lincoln Electric website and read about Miller Electric’s latest innovations to the inverter based welding power sources on their website.  Bottom line is that these innovations in welding make it possible for welders to go anywhere! 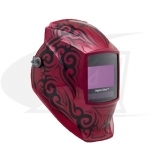 Auto-darkening Welding Helmets….  no more flipping your lid (head) and straining your neck.  And speaking of helmets, how ’bout all those cool graphics and innovations like under the (welding hood respirator systems to protect your lungs!

And for those over-40 eyes, you can even get cheaters! (some of us are more thankful for those than we care to admit!) 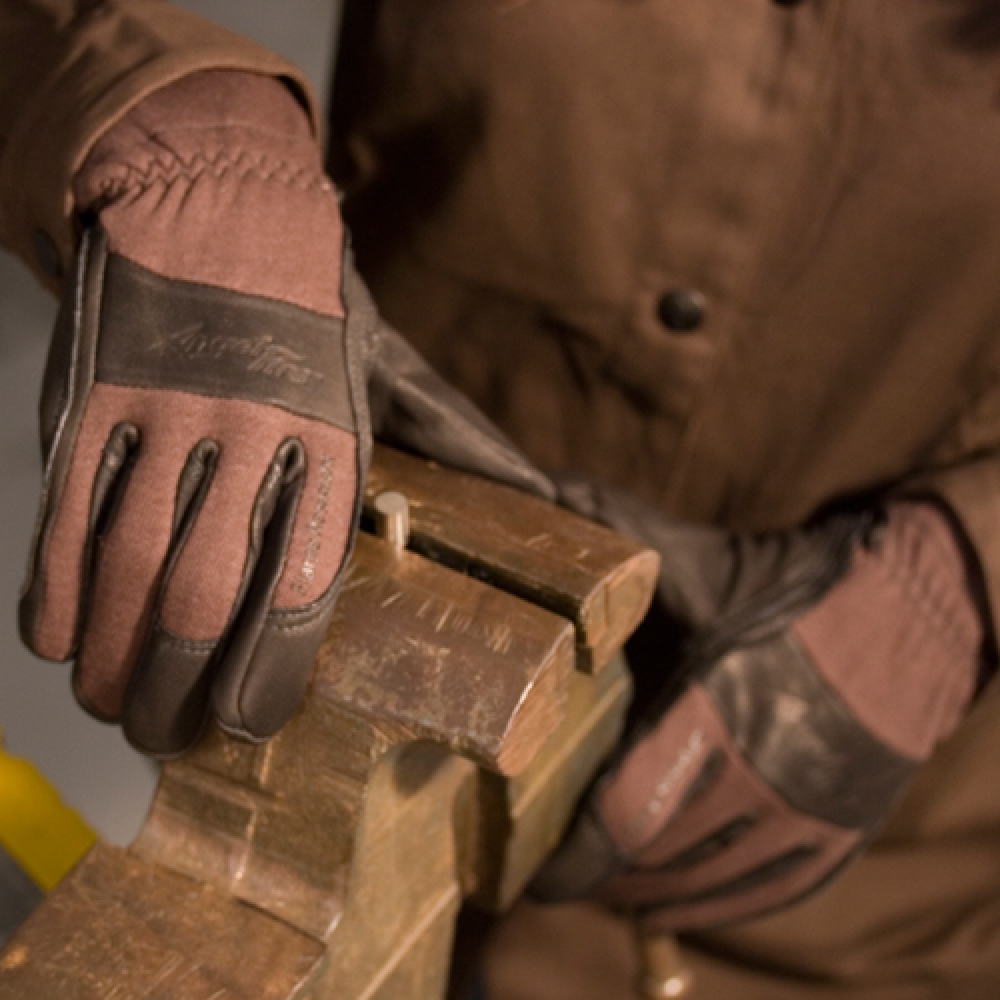 So as you crank up your power supply and get ready to lay down a bead….  think about what you’re thankful for, and let us know!  We’ll add it to our ever-growing list.  And have a Happy Thanksgiving!

No, we’re not talking about not insects, nor the Protestants.  These are the Women Airforce Service Pilots (WASPs) who served during WWII (the first to ever do so) — right alongside the Rosies who helped build the planes in which they flew!

WASHINGTON – A long-overlooked group of women who flew aircraft during World War II were awarded the Congressional Gold Medal on Wednesday. 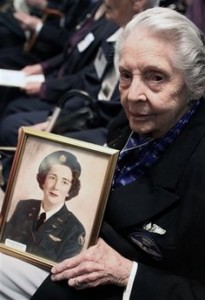 Known as Women Airforce Service Pilots, or WASPs, they were the first women to fly U.S. military planes.

About 200 of these women aviators, mostly in their late 80s and early 90s and some in wheelchairs, came to the Capitol to accept the medal, the highest civilian honor bestowed by Congress.

In thanking them for their service, House Speaker Nancy Pelosi said these women pilots went unrecognized for too long.

“Women Air Force Service Pilots, we are all your daughters, you taught us how to fly,” Pelosi said.

In accepting the award, WASP pilot Deanie Parrish said the women had volunteered to fly the planes without expectation that they would ever be thanked. Their mission was to fly noncombat missions to free up male pilots to fly overseas.

Albert Paley went from designing jewelry to creating sculptures of immense stature, but continued to use the same soft touch, even when creating giants out of steel.

Size, Scale and Detail in Creations of Steel

It is easy to be impressed by the Albert Paley retrospective at Grounds for Sculpture, the 35-acre sculpture park and museum on the former site of the New Jersey State Fairgrounds in Hamilton. The size and scale of the metal sculptures in this indoor exhibit are mind-blowing; some pieces are around 15 feet high, while others weigh up to a ton. They are monumental. 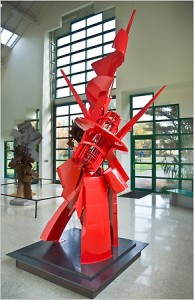 Born in Philadelphia in 1944, Mr. Paley initially worked in New York City making art jewelry, but in the late 1960s he moved to Rochester, where he is on the faculty of the Rochester Institute of Technology. He is essentially an abstract artist, assembling dynamic, flamboyant structures using wedges, blocks and ribbons of steel.

The artist’s training as a jewelry designer has served him extremely well, for while the scale of his artwork has exploded, his attention to detail has remained steadfast. He is a perfectionist who seems to take delight in challenging himself in terms of execution and concept. He is also the only heavy metal sculptor I know who can make his material seem fragile and delicate.

I want to steal the name of her blog.  Seriously.

This is a fantastic look into the workings of a women welder’s mind written by Wendy Welder.  Perhaps she is related to our good friend, Joe Welder??

How it all started.
Even as a little girl, I had dirt under my fingernails and grease smeared across my face. I grew up in the garage, at the shop, out in the yards with my Dad. Dad worked in tire retread and his hobby was cars, so I saw a lot of cars, a lot of trucks and a lot of men in my childhood. 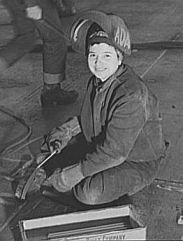 Weekends were spent at the race track or at car shows. Dad raced a 1972 Nova before I was born, and I think everytime we went to the track he wished it was him out there. It wasn’t long before I wished it was me.

My first car was a Chevy Nova. I drove it everywhere, and I loved it like it was my child. But, it was my first car, and I was just learning how to take care of it and how everything worked. My parents always reminded me to check the oil and I always forgot. When the engine blew, Dad made ME replace it. (Of course he helped) And while I had always been around when he worked on cars, seeing the daylight through the hole in the block where the rod had flown through, and the whole process of the replacement, the sense of accomplishment when the car was up and running again, made me love that car even more and made me want to spend the rest of my life around cars.