Her husband handed her a welding helmet, a chipping hammer, rod and welding lead, Mandy watched him weld for a bit, then tried it herself. “I decided right then welding was not for me,” she says.

Thankfully, Brandon didn’t let her give up, told her to keep trying and she did, practicing almost four hours that first night. Over the next several months she continued to practice. “Each time I picked up my stinger and put a new piece of rod to the metal, I learned more and more about technique and what I needed to do to lay down a better weld.” 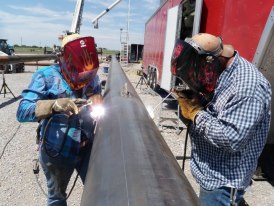 In an obvious show of respect and encouragement, that Christmas some seven years ago, her husband bought her a Miller auto shade welding helmet. Ever since then Mandy has been welding as part of her duties as a millwright alongside her husband in the family business: Norwood and Company.

Eventually she learned to MIG weld, but still, Arc welding is the technique Mandy feels most excited about. “With Arc Welding, you have to feel each movement and you have to really pay attention to what you’re doing. Some people use a J-hook technique, but I tend to use small circular motions with my rod… [and] there’s no better feeling than to take your time and lay down a beautiful 1 /2” weld with 7018-1/8” rod and watch the slag just peel itself off the top. To me it is an art.”

Mandy worked many jobs (lifeguard, pharmacy tech-in-training, office jobs, retail, etc.) and she was always bored. But working as a millwright is a perfect job for her—it changes every day, from fabricating catwalks to 100 foot tall grain leg structures and towers to repairing a roof or even pouring concrete. “There is something about climbing an 80 foot ladder to the top of a grain bin early in the morning before anyone in that particular town is awake to finish welding on whatever it may be, and you see one of the most beautiful sunrises you will ever see. The job, the rush from the height, the landscape, everything adds to why I love my job so much, and I owe it all to the man I love for getting me into it.” 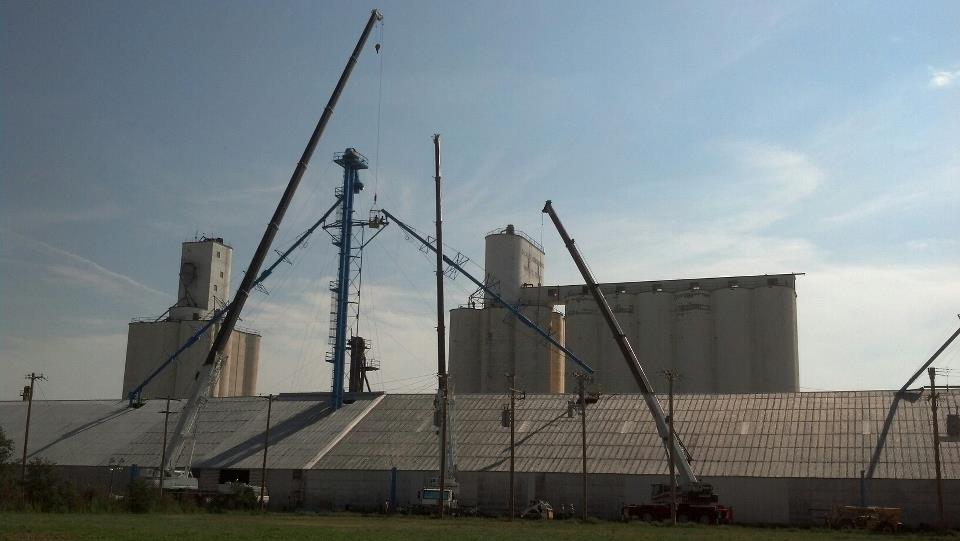 One of her largest welding job to date was in Texas last year where they installed two new Grain Handling Systems at two locations. This included assembly on a new 150’ Grain Leg and fabrication of the majority of all of its components. Mandy did the majority of welding on all of the spouting and towers needed for these two systems. The spouting was 18” in diameter and weighed 42 pounds a foot. The first two spouts I fabricated were over 117’ long. Mandy personally laid down over 200’ of ½” welds on each spout with 7018-1/8 rod. “It was my biggest welding project to date with the company, and I was so proud to hear our Engineer say they were some of the most beautiful and structural sound welds he has seen,” she says.

Like many women in the welding industry Mandy has experienced discrimination, but never from her husband, her family, or anyone on their crew. Though once on a jobsite a plant worker started to ask her a question, then looked her up and down and said, “Never mind, you’re just a girl.” She was stunned, but remained professional. And when he asked the guy next to her? “I jumped in and answered his question, ending with the fact that the guy he asked was actually new to our company, that I was second in the chain of command on this crew, and that GUY wouldn’t have known the answer to the question.” He quietly walked away. 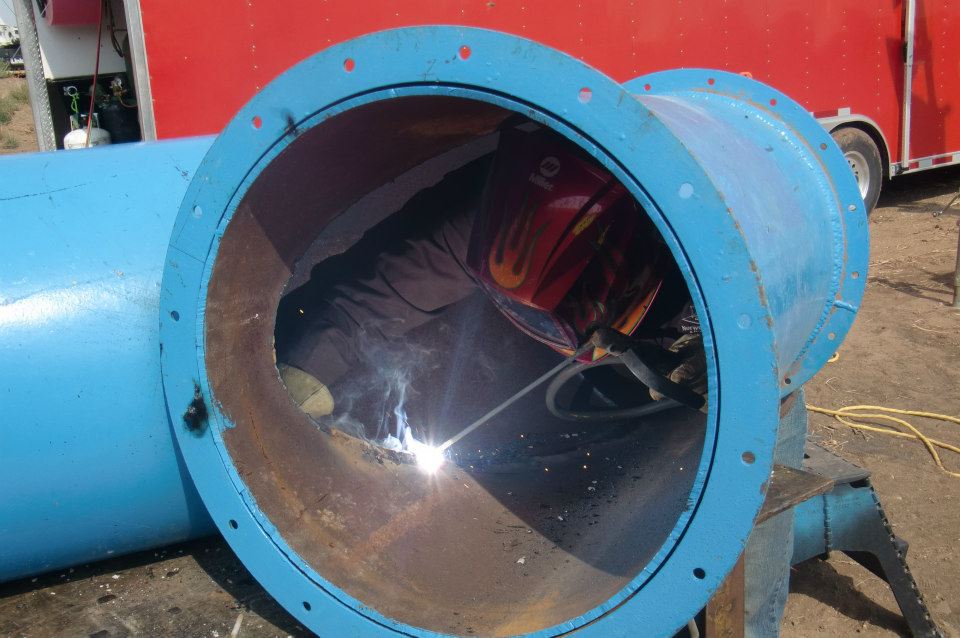 Mandy’s way of dealing with dirty looks or doubt: she just works harder. “Not always, but usually once they see that I can work just as hard as they can, it changes their perspective—and they think it’s pretty cool,” she says.  [EDITOR’S NOTE:  how many big guys do you think could fit into an 18-in spou and WELD ? ]

And if men the company hires think her place is in the kitchen, that’s fine with Mandy: “I will be in the kitchen cooking up some homemade Red Pepper Spaghetti with Mozzarella Stuffed Meatballs or baking some homemade pies, but not until AFTER work.” Her husband always stands up for. “He usually tells them that I am the best worker and welder he has on his crew and I want to do my best to prove him right.”

To her 15-year-old self Mandy would say “Pay attention in school and work harder!” And there’s a quote from OG Mandino she says she would share, “The only certain means of success is to render more and better service than what is expected of you, no matter what your task may be.” Good advice for all of us! 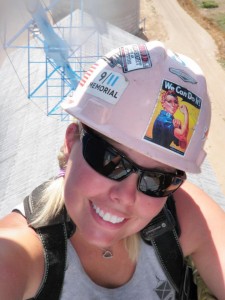 I’m sure Mandy’s positive attitude and confidence comes from her family. She says she always enjoyed spending time out of doors with her dad building things. And she comes from a long line of very strong women who taught her she could do whatever she wanted if she put her mind to it. And Mandy is passing this on: “When my little sister came into the world, I was 13 and I didn’t realize it then, but I gained the responsibility of a role model. I want her to realize that there are other options out there when it comes to careers for women. Even if she doesn’t choose a career the same as mine, I want her to be proud of me and what I do.” To her now 16-year-old sister, and any other young woman interested in welding as a career Mandy would say:

If something interests you as a career, even if it is something women “aren’t supposed to do” GO FOR IT! There is nothing more rewarding than to do a job and do it well, all while proving the doubters of the world wrong. Welding in particular, is something you have to work hard at to perfect. But to be able to stand back and look at something and say, I helped to build that, whatever it is, is one of the best feelings in the world. I say, try it. What do you have to lose? You may really like it. But I do have a warning, welding is addicting, and if you’re like me, you won’t want to stop!

Being a welder and being a woman are not mutually exclusive. Mandy says that while work takes up a big portion of her life, “I do like to trade in my hard hat and steel-toed-boots for high heels and a dress from time to time. I am, after all, still girl—just a girl that drives a big yellow truck with a welder in the back!” 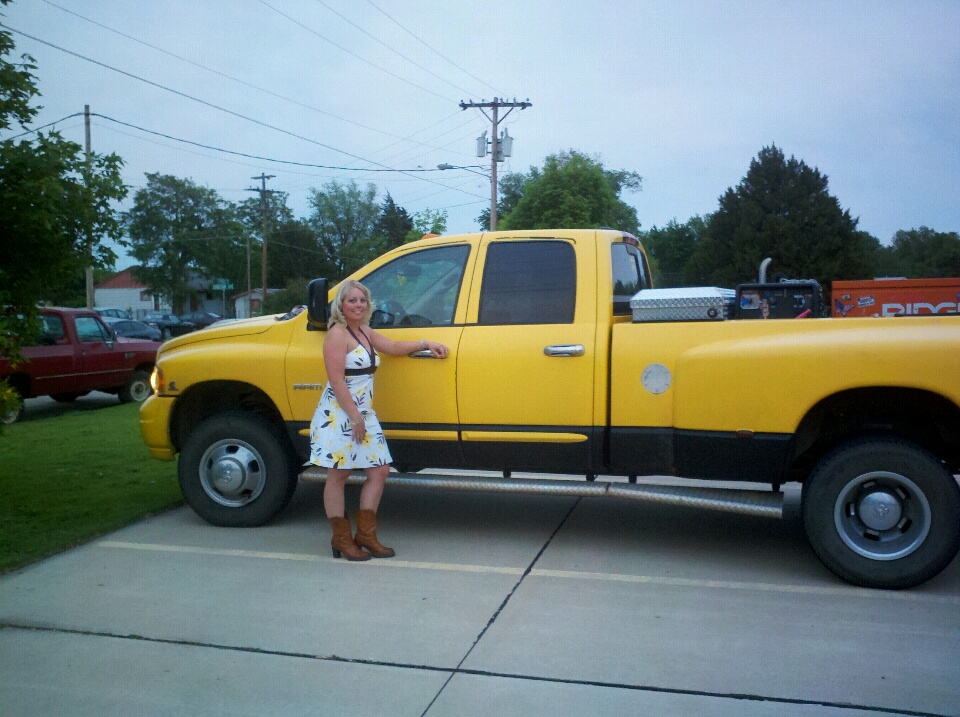 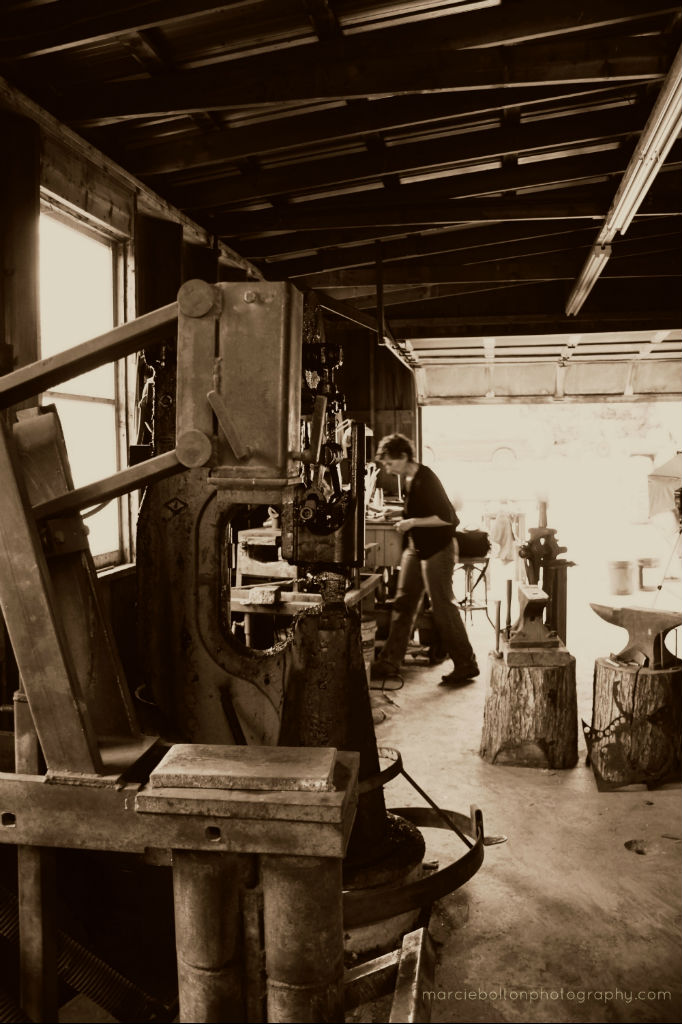