Geraldine Doyle: We Can Do It model

Geraldine Doyle, who inadvertently served as the model for the We Can Do It campaign, passed away on December 26, 2010 in Michigan.

In 1942 at the age of 17 she had worked briefly in a factory pressing metal. It was there that she met J. Howard Miller, the graphic artist who created the We Can Do It campaign.  (I briefly looked for a photo of Geraldine Doyle, but to no avail– perhaps one will turn up in the news or on the internets in the upcoming days)

Our condolences to her family…

This iconic image is often misidentified as  Rosie the Riveter…  an illustration by Norman Rockwell for a 1943 magazine cover of the Saturday Evening Post (as shown here).

What I like about the image (actually both images) is that they show women as strong with a can-do attitude and a willingness to work hard.

UPATE:  The Washington Post has a link to the original photo taken by Miller (red polka dot bandana and all- though its in black and white), and the LA Times has a stunning photo of Geraldine Doyle as well. 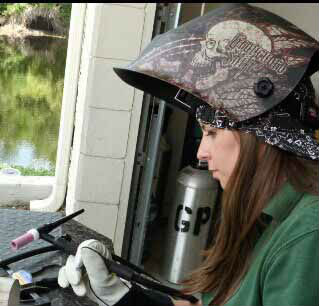