The Make it in America Plan

Have you heard of the Make it in America Plan?  How do you think this will affect you?

For the Strength of Rosie the Riveter: Make It in America
by Leo W. GerardInternational President, United Steelworkers 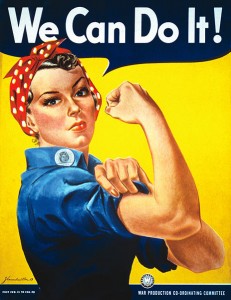 Rosie the Riveter defiantly rolls up her blue work shirt to show off a brawny bicep. She’s a symbol of American strength.

She worked in a manufacturing job, one of millions that constructed the defense machine that won World War II for the Allies. She said, “We can do it.” And America did.

Now, however, shuttered U.S. factories and off-shored manufacturing are sapping American strength. The nation has lost more than 40,000 manufacturing plants and one-third of its manufacturing jobs, nearly six million, over the past dozen years. China is on the verge of overtaking the U.S. in manufacturing output. And Americans know it. Late in April, 58 percent of 1,000 likely voters told pollsters they believed America’s economy no longer led the world.

They also told pollsters they supported enacting a national manufacturing policy to promote resurgence of domestic production — a return to the days of a robust Rosie the Riveter and a country that could secure its independence with dynamic manufacturing capability.

Democrats in Congress heard that message. They’ve created a program called “Make It in America.” They plan to pass a series of bills to create an environment in which both Americans and American manufacturers make it.
CONTINUE READING –>