Gordon Brown has lately honoured the women who worked in the steel factories during WWII!  Huzzah for our fellow Rosies from across the sea!

Prime Minister Gordon Brown has paid tribute to hundreds of female workers who toiled in the steel factories of South Yorkshire during World War II. 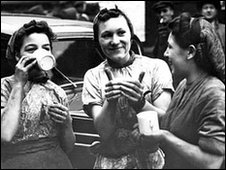 The workers, known as the Women of Steel, produced metal which was essential for the war effort.

Among them were Ruby Gascoigne, 87, Dorothy Slingsby and Kathleen Roberts, both 88, and Kit Sollitt, 90, who were honoured on a visit to Downing Street.

They travelled from Sheffield on a train named the Women of Steel Express.

The engine was specially renamed in honour of the occasion and was unveiled by the four steel mill veterans before their journey on Wednesday.

The women received a special letter of thanks from veterans minister Kevan Jones and met Sheffield MPs at the House of Commons before visiting 10 Downing Street.