Welding and school spirit come together for the students of
Colorado’s Hayden School District.  Each of the schools are welding a mascot — and get this — they’re welding it for one of the other schools!

Hayden — Kevin Kleckler, director of the Babson-Carpenter Career and Technical Education Center, hopes a project some of his welding students are working on will promote goodwill among the area school districts. 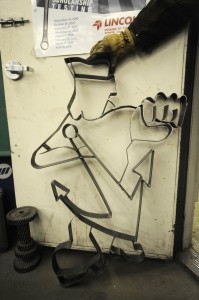 Hayden School District students participating in the welding program at the vocational education facility are designing and creating steel pieces, made from scrap metal, that depict the mascots of the Steamboat Springs, South Routt and Moffat County school districts.

A student group in the welding class recently completed the Soroco ram. Another group is nearly finished with the Steamboat Springs sailor.

Rodriguez and Zirkle, having finished the bulldog, began a new project last week. On Tuesday morning, they were piecing together steel that eventually would depict the Denver Broncos logo.

When Rodriguez and Zirkle finish the Bronco in the next few weeks, it will be about 5 feet long and 3 feet tall. They’ll eventually present it to the Broncos through a contact Kleckler has with the team.

What does The Green Hornet have to do with Welding?
Lincoln Electric, Welding Fun

What does The Green Hornet have to do with Welding?

There Are No “Welding Socks”

We Need More Girls in Engineering