All I can say is, it’s about time!

It’s about time somebody put up a statue in honor of the working women of WWII, and it’s high time I find out about it (it’s only been nearly a decade)!

Now, if we could just get some of the other states to follow suit…

When Elizabeth Ward decided to apply for a job at Tinker Air Force Base, it was no precedent-shattering event.

“I just walked in and got my job,” she said. “It was because of women like her, that it was that way.” 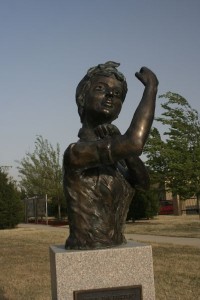 The “her” she referred to was Frankie Collier, 73, who went to work for the Douglas Aircraft Plant, now building 3001 at Tinker, the day she turned 18 in August 1944.

As an inspection clerk, Collier didn’t handle the wrenches, tools and rivet guns that gave the name “Rosie the Riveter” to a whole generation of women who took over defense manufacturing jobs to free a equal number of men to fight World War II.

“I worked there until the end of the war, then they just let us go,” she said. “There was nothing done about it, nothing said. They just told us to go home, the war was over.”

In the 55 ensuring years, Collier — like so many of her generation — got married, raised a family and continued with a teaching career.

One thing was missing, though. There was no memorial, no statue, nothing to commemorate the tough work these women tackled during the nation’s dark days.