It’s midnight at a community college in Oregon.  The classroom is brightly lit, and the students are up and about and… welding?

Thanks to a new series of “graveyard” welding classes, this has become a regular feature of several area colleges.

In the Midnight Hour

Midnight classes, once a quirky scheduling option available at only a few institutions, are gaining currency at a growing number of community colleges as student demand for specific courses increases and available classroom space for those courses decreases. 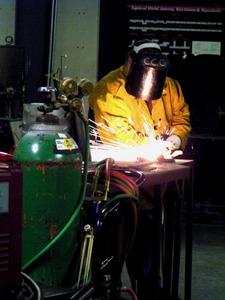 Though it is unclear which institutions pioneered the idea, Clackamas Community College, in Oregon, began offering what became known as “graveyard welding classes,” lasting from 10 p.m. to 2 a.m., two nights a week last spring.

The classes were so popular that the college expanded them to four nights a week this fall, and students can now take five different welding courses during the “graveyard shift,” ranging from an introductory section to those focusing on specialized projects.

John Phelps, one of two adjunct welding instructors who lead the late-night courses, said the college’s experiment with these sections was a matter of necessity.

Even with some welding sections available on the weekends, he said, the college reached its capacity for these courses last fall and was forced to turn away a number of students.