Everything You Ever Needed to Know About Rosie the Riveter

I happily stumbled across this article at the Pop History Dig.  I say “happily” because I have never article more succint, more informative, or more delightful than the one which I am about to relate to you all.

It is, as was suggested by the title, ALL about Rosie the Riveter – the paintings, the posters, the song (did you know there was a song?), the campaigns for women workers, and loads of interesting little tidbits along the way.

For instance, did you know that Marilyn Monroe was once a real-life Rosie?  Well, she was, but you’ll have to read on to find out all about this, and loads more!

“Rosie the Riveter” is the name of a fictional character  who came to symbolize the millions of real women who  filled America’s factories, munitions plants, and shipyards during World War II.  In later years, Rosie also became an iconic American image in the fight to broaden women’s civil rights. 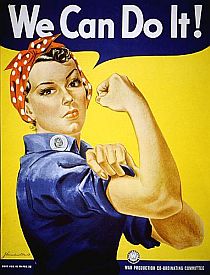 After the Japanese bombing of Pearl Harbor in December 1941 and the full involvement of the U.S. in World War II, the male work force was depleted to fill the ranks of the U.S. military.  This came precisely at a time when America’s need for factory output and munitions soared.  The U.S. government, with the help of advertising agencies such as J. Walter Thompson, mounted extensive campaigns to encourage women to join the work force.  Magazines and posters played a key role in the effort to recruit women for the wartime workforce.

What to Wear in the Shipyards
Original Rosies, Welding History

What to Wear in the Shipyards