Welding and Art in Taos 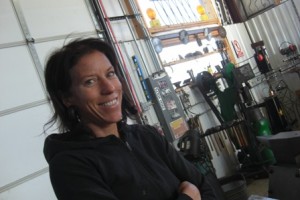 I first ran into Christina Sporrong online while searching for “women welders.”  Her business website for Spitfire Forge in Taos, New Mexico came up.  I bookmarked the page, and even exchanged a few emails with Christina.  One of the things that intrigued me about her was that she teaches welding workshops for women, so a few months later when I found myself in New Mexico I had the opportunity to meet her face to face.

Christina moved to Taos in a VW Van with four hundred dollars in her pocket and a toolbox.  Even though she had some skill as a welder, she started waitressing to earn money.  A lot of the girls she worked with thought it would be cool to learn to weld, so Christina started teaching them.  Back then she only charged $50 per person and used that money to buy more tools.

She’s now been in New Mexico for over twelve years and lives on Taos’ west mesa on 15 acres of land.  She built her house herself, putting to use her skills in construction and fabrication and her artistic aesthetic.  When she sent me directions and a description of the property via email I was sure I would get lost and I knew, in my low riding Volkswagen beetle, it would be slow when she told me to turn onto a gravel road and go for seven miles.  I was supposed to look for the tall ranch gate with an anvil and a dark house with gear teeth and lots of sculptural stuff in the yard.

“It should be obvious,” she wrote. 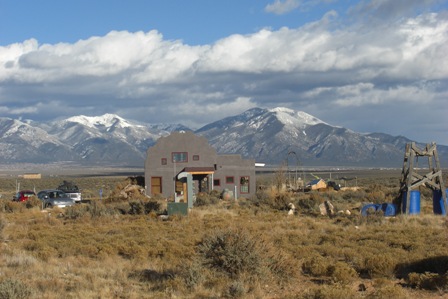 We were both right.  The seven miles took me about 20 minutes, skirting the western edge of the Rio Grande.  Christina’s description, however, didn’t do the property or the landscape justice.  The house itself is a rustic brown concrete looking structure, its shape reminiscent of a Quonset hut with the roof shaped like the wheel of a gear. Although it is industrial, it somehow feels organic, mimicking the shape of the Sangre de Cristo mountains rising above Taos to the east across the gorge. 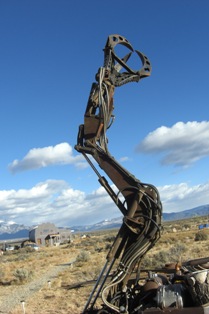 Some of the sculptures scattered about the yard are Christina’s and some are the work of her partner, Christian, who built the large robotic hand that rises above the mesa like it wants to grab something right out of the sky.

Christina herself was not at all what I expected.  She’s slender and tall–   at least taller than my five foot two inches.   She wore jeans and a sweat shirt, often pulling the hood up over her mussed brown hair to ward off the autumn chill.  Even without make up or fancy clothes, Christina is beautiful, her green eyes sparkle, and her smile is genuine.  She made me feel at ease and welcome in her home.

I shivered and buttoned my sweater.  It was a good twenty degrees colder than the Albuquerque I left that morning.  Christina told me that some winters she used to head to the San Francisco Bay area to teach welding classes at The Crucible, a non-profit industrial arts center in Oakland.  Nowadays she offers a week long course at her own shop, “De Mystify Metal.” The course is Christina’s way of promoting metal as a tangible medium for women to work in.  She said for a lot of women even the tools in the shop are intimidating. 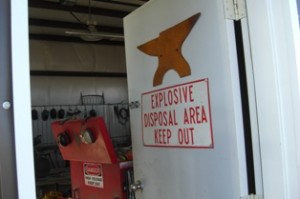 I told Christina about my own experience going into junior high school.  I tried to sign up for the shop class that included some basics of auto mechanics, carpentry and metal work.  I was “counseled” out of it and encouraged to join the Home Economics class– the one that all the girls signed up for.

I imagine all those girls, now women, signing up for courses like Christina’s.  They come from all over, she told me, “from Canada, and even Europe.“  It feels really good to empower women,” she said.

In addition to the welding workshops, Christina fabricates artistic gates, railings and other decorative and architectural metalwork that can be found all over northern New Mexico.  Though sometimes she works collaboratively with builders or home owners, for the most part the designs are her own.  “If someone comes in and shows me a picture of someone else’s work I won’t build it. I’m sort of famous for being difficult in that way,” she said.

She told me that business is good, even in this economy.  “The rich don’t get any poorer,” she said.

Although the decorative ironwork has been her bread and butter, she’s hoping to phase out of that business.  “Welding is pretty toxic; I’m going to be forty this year, so I’m hoping to put more of my energy into my own work,” she said.

Christina paused, then added, “Even if I fail at it, I feel like I have to try.  What’s worse is not trying.”

I could only nod, remembering one of my favorite quotes from Theodore Roosevelt, “Far better it is to dare mighty things, to win glorious triumphs, even though checkered by failure, than to take rank with those poor spirits who neither enjoy much nor suffer much, because they live in the gray twilight that knows neither victory nor defeat.”

As Christina made me lunch–   an omelet made with fresh eggs from the chickens out back, I looked around her place.  The view through the floor to ceiling picture glass window showcasing the mountains of Taos was inspiring.  It was November and the peaks were already snow capped. Or at nearly 12,000 feet probably still snow-capped.  From the center of the living room I spotted a trapeze and a thick red ribbon hanging from the ceiling. I had to ask.  “Are you an acrobat?”

She told me she learned trapeze 12 years ago and has been working with Wise Fools New Mexico, a circus based in Santa Fe.  For Christina it’s a great way to stay in shape and stay strong. “And it’s really healthy for the mind to hang upside down…   it’s just silly,” she said.

When we met, Christina had just started her latest project–  The Heron.  She was working on a way to fund its fabrication and she is now fulfilling her dream to take it to Burning Man.  Although she had been a Burning Man regular in the past, she hadn’t attended for a while—until last year when she went to check it out again.  She said even though its gotten big, it’s still pretty cool and that everyone–  the people that DO stuff are older, people with time and money.  “It’s all about the art,” she said. “You go to experience these large scale sculptures.” 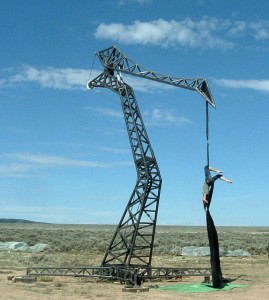 The Heron will soon join those large scale sculptures on the Black Rock Playa in Nevada later this month.  Standing over 30 feet tall, this steel installation will serve the festival as a sculpture and a spontaneous venue bringing two of Christina’s artistic passions together— metal art and aerial performance.

Imagine walking across the playa in a mild dust storm. Figures appear and vanish. Scenes flash in and out of focus. All of a sudden a colossal, moving sculpture—part prehistoric bird, part oil derrick—takes form in front of you.

When the air clears, you see its wings lit with fire in the night sky and its skeletal trussing casts bold shadows on the plain. (Sporrong, Grant Proposal 2008)

Inspired by the cranes at the Oakland Shipyards, for Christina, the Heron epitomizes the evolutionary progress of civilization’s march through mechanization, exploring the relationship between machine and nature.

After she returns to her New Mexico mesa, Christina will no doubt be working on her next dream– to establish a residency for women metal artists. The old shipping container out back will be made into a one room casita, and the resident artist will have full access to the metal shop and the stunning vistas that Christina has found so inspiring.

When I left, I gave Christina a refrigerator magnet– a small token of my appreciation for her time and welcoming spirit.  The single word DREAM etched into a small shiny piece of metal seemed somewhat inappropriate.  Christina is already dreaming.  And more importantly, doing.

1. The Rosie the Riveter Memorial is located in the Bay Area, not too far from the Oakland Shipyards

2. Since meeting Christina, she’s also started up another business, custom fabricated equipment for the aerial artist

3. I was in Taos again in July,  and ran into Christina at Eske’s Brew Pub (best fish and chips ever!) …  New Mexico really is a small town!

4. Follow the fabrication of the Heron at Christina’s blog…. 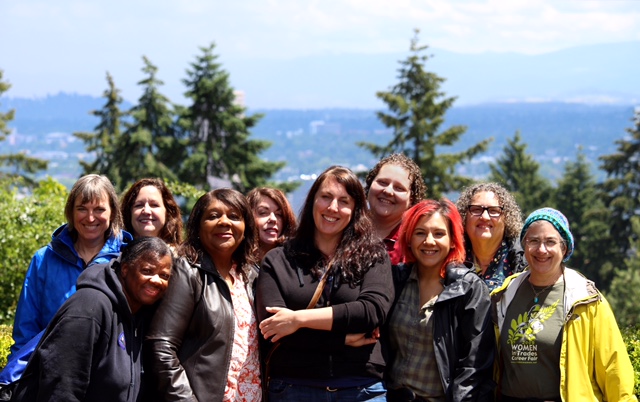