The Guru of Welded Gates

Jim Gallucci is not known as the “guru of gates” for nothing.  His work can be seen all over North Carolina, from his hometown of Greensboro and its Milennium Gate, to the capital city where he’s just been comissioned to build his biggest project yet: a $2.29 million set up in downtown Raleigh designed with the city’s nickname, “The City of Oaks”, in mind.

GREENSBORO — Jim Gallucci celebrated his 58th birthday immersed in the largest project of his life.  He long has aimed for such professional heights in his metal sculpting career. If he has a wish, this is it.  “That’s the best birthday present any sculptor can have, doing what they love,” he says. 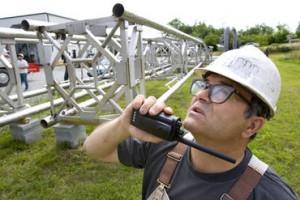 But Gallucci barely took time out for a slice of cake.

Now comes the true test: trucking the pieces to Raleigh and tackling the strenuous task of assembling them.  Next will come fabrication of 32 matching bollards, or 42-inch posts, to line the plaza’s Fayetteville Street.  The project will bring Gallucci’s south Greensboro studio its largest paycheck ever: nearly $2.29 million.

Friends predict that the towers will raise Gallucci’s public profile to new heights, perhaps even internationally.  “It puts him in that class of the highest-profile and highest-paying commissions,” Reidsville sculptor Brad Spencer says.

“It makes him a player on a bigger stage.”