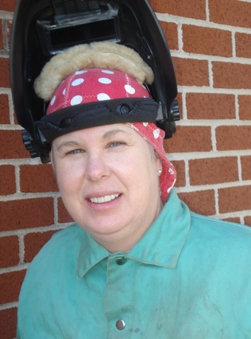 We first “met” Marcia Sommer when she called in to Arc-Zone.com looking for some equipment for a laser welding application. A welder for 25 years, Marcia is a technical consultant and teaches at two local colleges.

“Crowder College and Missouri Southern State University has an Alliance that does consulting and instruction in industry. They needed a combination welder who could teach and consult. It snowballed from there,” she says.

She wasn’t sure about the teaching part of the job at first. Marcia learned a lot about tools and troubleshooting from her father, a skilled craftsman, but got on the job training as a welder’s helper for a pipe crew where she worked for two years and took night classes at the local trade school. She learned by being a good hand for the “old welders.” Marcia says you just have to “be still and listen. So that is how I teach now that I am the old welder,” she jokes.

That way of teaching seems to work for Marcia– on a lot of levels. “After I finished [teaching] my first class I knew this was something where I could get all the best things you look for in a job. Great people, important work, paying back, and feeling blessed.”

Her favorite projects are making something for the Agricultural Department’s large, working farm at Crowder College. “My students enjoy doing real world projects,” she says.

Though GTAW with stainless or titanium is what she loves best, Marcia says that in the last few years she has enjoyed GMAW as well. “I put together a large deer made of ¼” round stock. The GMAW let me move as fast as the ideas.

“I’m from the Ozarks. I truly love where I live: rolling hills, oak trees, red-tailed hawks, deer and clear streams. All these things show up in my work when I am making something for the family,” she says.

Over the span of her career, from aerospace to jet engine repair, production and pipe welding, Marcia says she has indeed experienced some discrimination. Especially “back in the day.” When she first started out she was riding back from a plant shut-down, a pipe job at a tire plant in Ardmore Oklahoma. Two of the male helpers had gone on home, too tired to work any longer. Marcia and another male helper stayed on. They rode home with the boss who told them that he really appreciated their hard work. Then he said he would raise Marcia’s pay a quarter an hour– the male helper would get a 50 cent an hour raise because he “had a family to feed.”

“Back then, that was just the way of it, but it sure did stick with me. I learned that day what ‘don’t cast your pearls before swine’ meant.” Marcia found a job soon after where giving her best effort meant she would get the same pay as everyone else.

Marcia prefers other kinds of challenges that are more fun to deal with. She says you have to have the ability to troubleshoot, problem solve and interpret prints and codes. Her biggest career challenge to day has been helping her corporate clients understand the importance and reasons for using the AWS Welding codes.

Challenges are part of what makes welding a good career path for anyone, according to Marcia, and welding “is a great opportunity to have a lifelong skill that will do more than just pay the bills. “ Not to mention opportunities to do things you never thought you’d do. Marcia’s favorite moment in working in the welding industry? “The thrill I felt when I was able to have lunch on top of a 120 foot structure!” she says.

Not everyone will get opportunities like that, but the jobs are varied. “Welding is sometimes dirty work, and sometimes I can do it an A-line skirt and pumps– that’s what makes welding so great!” she says.

Marcia would advise any young woman pursuing a career in welding to “work with integrity, always be ethical, and take every opportunity to learn.”

And when asked what advice she would offer her younger self, Marcia says, “If I knew then what I know now, I would have set bigger goals for myself.” Good advice for whatever your path.

Don’t tell THIS Woman Welder No!