Jessi Combs – From the Black Hills to the Baja 1000

Growing up in the Black Hills with a mechanical engineer for a father, it’s no surprise that Jessi Combs became a metal fabricator. 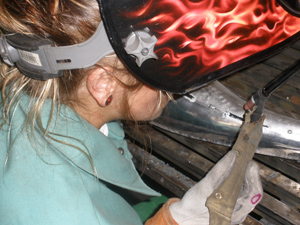 “I was surrounded by the Sturgis Rally, Cruise Night, and a lot of 4-wheeling…. if I broke it I had to fix it, and if I wanted it I usually had to make it, and making it usually meant welding was involved,” says Jessi.

Jessi has been welding for as long as she can remember even though she wasn’t always great at it. “But that’s what school and practice is for,” she says.  And it wasn’t just welding that interested her.

WyoTech offers a degree in Custom Automotive Fabrication, a natural fit for Jessi’s interests and skills.  “To weld is to join pieces together to the point of melting the surfaces together. As a metal fabricator, there is a lot more planning, shaping, fitting and building than simply welding it together.”

How Jessi Combs Got Her Start

Jessi’s career path started like many young people’s from working retail to waitressing and “one lame desk job that lasted only six months.”  However, things changed by the time she graduated. 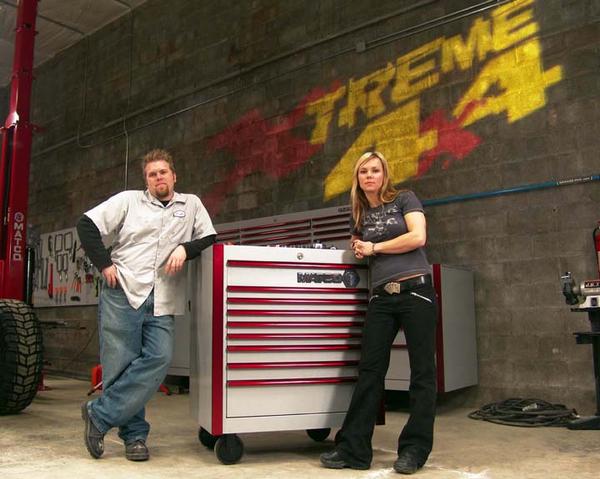 She was hired as a Fabrication Specialist building a 1969 Mercury Cyclone as the WyoTech SEMA Show car, and right after that she became the host of television show Xtreme 4×4, the off-road, how-to show on Spike TV.

“For over three years we built all kinds of off-road trucks, trailers, tow rigs, and even some street trucks for millions of viewers. Since then I have been doing side jobs fabricating for others in the middle of doing a slew of freelance TV gigs,” she says.

Jessi is also a spokesperson for the American Welding Society and says that the average age of today’s craftsmen is 58 years old– soon they will be retired.

“As spokesperson it is my job to excite our youth about all the possibilities of becoming a welder. There is a high demand for welders and there is a lot of money to be made as a welder.”

Many women are under the misconception that women who weld are not particularly feminine. Jessi seems to balance this very well.  “No matter how dirty I get or how many guys I work with, I still love doing girlie things. And at the end of the day I know that I am still the beautiful, nurturing creature God created me to be.”

According to Jessi there are many lucrative opportunities in the welding world for women and that women are created with patience and great attention to detail. These jobs bring a sense of courage and independence. “Not all of them are dirty jobs either,” she says. “Look at the medical and jewelry fields or even art and furniture.  If you’re looking for a fun career, change of pace or something to challenge you a bit more there is a plethora of opportunities.”

And, in case you’re wondering, Jessi is TIG-er.  “It’s a very calming process and when you’re done its quite clean and actually beautiful.”

Read about our “Tips for Women in the Welding Industry” here.

EDITOR’S NOTE:  Our interview was delayed for a couple of days when Jessi went to the Baja 1000, something she’d wanted to do since she was young.  She reports via email:  “Pistol Pete and his trophy truck team let me tag along for the pre-run and the race. I got some seat time in the pre-run, but unfortunately we blew a head gasket at mile 8 and the trio was cut short.”
Hopefully they’ll do better next time around!

As a side note, if you’re not familiar with the Baja 1000, in 2006 my friend James Spring reported on this “toughest 24 hours in motor sports,” for public radio. 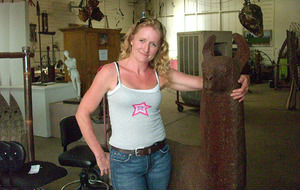 3 Traits Every Successful Welder Has