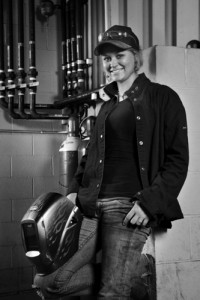 The Skills USA Championship is a well-known competition for high school and college students pursuing careers in trade, technical and skilled trade professions.

With various categories for participants to compete in, Sara Bingham seemed like an average participant at the Skills USA Utah State Championship. However, when she was announced as the first place winner in welding, Bingham stood out among her competitors.

“They called my name and everyone in the audience kept looking around to be sure they really heard a girl’s name. When I stood up, everyone’s mouths fell open in shock,” Bingham said.

Bingham welded for the first time as sophomore in high school at her father’s metal recycling business where she worked since she was 8. But, it was not until she took an advanced welding course at her high school that she began taking an interest.

Bingham’s high school instructor, “T” as she calls him, recognized her skill early on and kept urging her to continue with welding. Along the way, T continued to urge Bingham to compete, encouraging her to enter a local competition her sophomore year.

Typically Bingham is the only girl participating, but people are seldom aware that she is female because of her protective gear.

Bingham feels she has been fortunate not to encounter discrimination from her gender. “If anything, people are initially more helpful,” Bingham says. But once she welds, gender is no longer an issue.

She immediately gains respect from both men and women when they see her skills in action.
Bingham has competed in more than five different welding competitions and has completed 600 hours of welding, learning all major processes, including plasma and oxyfuel.

“Competing is the best thing that could have happened to me,” she said. Not only has she gained hands-on experience, but her participation has given her exposure to local companies for potential job opportunities.

Her most recent win at the state competition allowed Bingham to visit the Lincoln Electric company for hands-on welding instruction as part of a corporate partnership with Skills USA.
Bingham enjoys welding and looks forward to pursing the trade in her career.

“Welding is not only something I am good at, but it’s a career that will allow me to travel and make good money,” she said.