I admit, until I started working here at Arc-Zone.com, I had a lot of preconceived notions about welding. I had no idea how prevalent WELDING is. I know that sounds ridiculous, but I just never thought about it, but you find welding everywhere. 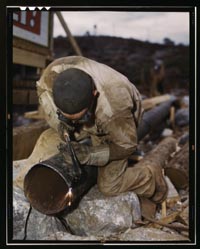 I thought welding was a dirty job (like the photo on the left) and didn’t take much know how. I thought welding involved lots of sparks flying (as in MIG welding). I knew nothing about TIG Welding, or Plasma Arc Welding or orbital welding.

I soon found out welders are smart. They have to know something about metallurgy, electricity, and geometry, for example. In addition, finer processes like TIG welding require the kind of dexterity that comes with dedicated practice. And good welders make good money.

I’ve learned a lot working at Arc-Zone.com, and much of it directly from our customers– fabricators of all kinds. We have customers who are restoring antique automobiles, building race cars or off-road vehicles. We have customers who are TIG welding titanium aerospace parts and others who are contract pipe welders working in refineries, LNG plants, breweries and dairies. We have jewelers and artists and factories with automated welding applications. The list is long and the applications are varied. And I had no idea.

I just came across this press release from the American Welding Society. And apparently I was not the only one:

The American Welding Society (AWS) and the Welding Equipment Manufacturers Committee (WEMCO), a standing committee at AWS, is seeking nominations for its Sixth Annual Image of Welding Awards.

The awards are issued in seven categories and the winners will be announced at the Image of Welding Awards Ceremony to be held during the FABTECH International and AWS Welding Show on October 6-8, 2008 at the Las Vegas Convention Center in Las Vegas, Nevada.

The awards recognize individuals and organizations that have shown exemplary dedication to promoting the image of welding in their communities. AWS is the world’s largest organization dedicated to advancing the science, technology and application of welding.

“Raising public awareness about welding is vital to establishing a positive image for the industry,” said Jim Horvath, chair of the AWS Image of Welding Subcommittee. “Every year, welding professionals triumph in inspiring young adults to join the field. Their passion helps to reverse negative and untrue industry stereotypes, such as unclean working environments and low salaries, which contribute to poor recruitment and the growing shortage of welders.”

AWS estimates a shortage of about 200,000 welders by 2010. The image of welding contest is part of a wider AWS campaign to draw positive attention to the welding industry. One such component of the campaign is a new AWS welding career guide that is targeted at students, parents, teachers and guidance counselors and includes success stories, AWS scholarships and student chapters, as well as other comprehensive information about a range of welding careers and entryways into the industry.

READ MORE ABOUT THE IMAGE OF WELDING AWARDS….

The Consumption of Consumables